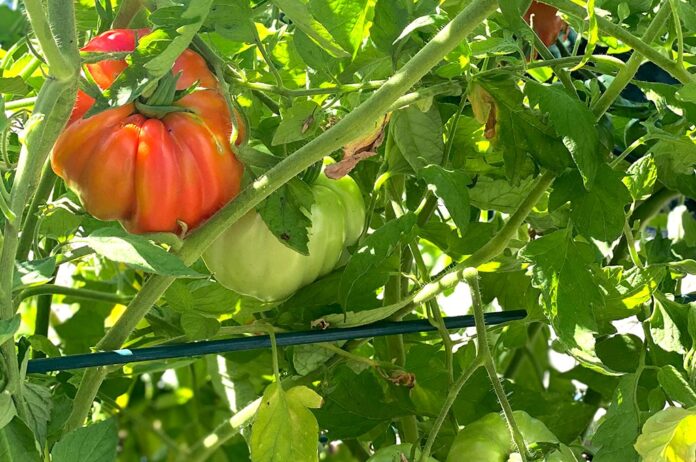 I caught up with Elle wandering through the left-over vegetable plants in the nursery. I was a bit embarrassed because those same vegetables, not many and bit scraggily-looking, were on my work list for the day to throw out.

“Are you still looking for some veggies?” I asked her curiously. I knew she had bought wagon loads of vegetable starts with her two younglings earlier this spring when the first rays of sunshine hit and excitement and hope was in the air. But now, with the lingering summer sun still very warm, I knew she couldn’t have much room left in her garden for more.

“No….no… not at all.” She sighed heavily with disappointment. She glanced around for her two active boys who had taken to playing an instant game in the nearby water fountain. “I just wanted to stop and see how tomatoes should look like at about now.”

Elle (pronounced like the letter “L”) had been an active gardener since her boys were born. She had always enjoyed the outdoors; previously biking and kayaking and hiking and camping but had switched to planting her garden when her first son was born. Now, four years later (along with son number “2,” she had some real-world garden experience…and the well-clipped shortened fingernails to prove it.

“I suppose I had too big of a dream this spring,” she continued. “I thought I could do Super Mom stuff and have the boys help plant and harvest tomatoes, which for some reason they both love and eat.

“We’ve been good on the planting.” Her voice began to drop. “Just not so much on the harvesting.”

It all came back to me. I remembered in the spring from Elle’s description, how the boys made it a game of Triscuits, cheese and who had the largest slice of tomato on top. The boys had started to become slightly competitive and it was Elle’s “new job” to make sure each slice of tomato on each Triscuit was of equal size. Otherwise, there could be trouble.

It’s always been there, of course. It’s the gardener’s dream to be able to pick a tomato from a garden that was planted with our own two hands and a bit of initiative. And then to water it, care for it, watch it bloom, and then to feel the excitement when we see the first signs of a green round fruit. There’s an immense satisfaction to bite into the freshness and warmth and ripeness of a tomato just picked. But for Elle, I suddenly realized there was a lot more unspoken that was on the line.

She also had the eyes of her two boys on her. And along with that, the expectation from them and worse still, from herself.

“The maddening thing is that I’ve actually researched how to grow tomatoes. Some say to trim excess blooms; some say to add fertilizer, some say to water more and others yet, to stop watering altogether. Frankly, the boys are young enough that I could stop right here, and well, they probably won’t remember their mother failing at tomatoes.”

I thought Elle, may be at the darkest moment of a gardener’s journey.

“I’m not 100% positive, but it might not be too late,” I blurted out, not quite knowing all of the details but trying to be hopeful nonetheless.

And there are thousands of different varieties of tomatoes that may need something a bit extra to unlock their secrets.

But the real garden villain? Vague instructions. I have read ad nauseam in online chats as well as articles and books about “watering regularly” or “add organic fertilizer.” Even the simple instruction of “plant in hot sun” can be ruinously vague for a busy mom.

There ought to be a better way.

Right there and then, Elle and I hammered out the best path possible for the greatest chance that she and her boys will be picking and eating and, hopefully, fighting over the largest slice.

It wasn’t straight forward by any means. I wish she had more sun. I wish the varieties she had chosen were placed differently. But nonetheless, there were a few solid critical changes to her watering regimen and some “Plan B’s” if the weather took a turn for the colder.

But more importantly, I didn’t want her to give up. For tomato lovers, there is a tomato for every condition.

It’s still too early to tell, but I look forward to seeing Elle and her growing boys. I want to hear the outcome in this season’s garden — good or bad. Either way, I know that Elle earned a stripe for her persistence — for her garden, for her boys and for herself.

Some Superheroes Have Gardening Skills…

Are You Raising a Bully?

Jennifer Vranizan: A story of courage.

Garden Crimes: Fraud in the Garden