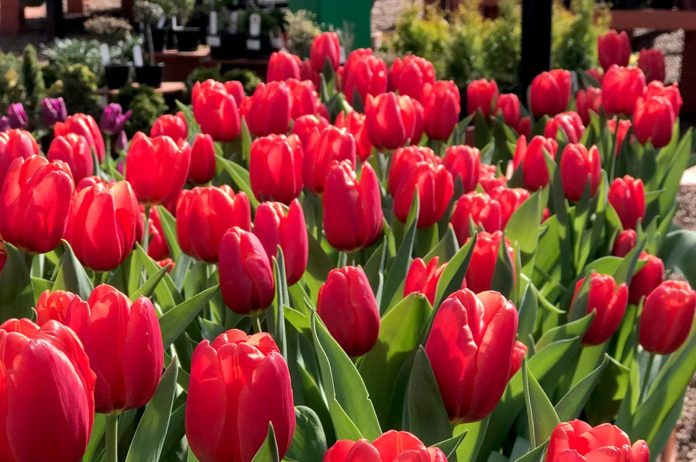 It was a warm day, the sun was out, the birds active, and the earthy, sweet scent of hyacinths and daffodils helped kindle a common spirit of gratefulness through the separated and evenly spaced people. It was the kind of day that, despite the ongoing raging virus, said, “Thank goodness for spring.”

Josie was among the people that day in the nursery and it surprised me when I saw her. Now, instead of her usual warm hug, she smartly (and considerately) waved hello to me from a generous 12 feet away. The surprise, though, wasn’t her smart greeting but that she was here by herself without Frank.

“No Frank?” I asked obviously.

“My son-in-law…took him for the day.” She responded hesitantly. “It’s been tough lately.” She added, her voice shaking with emotion. Frank, her longtime husband, had been diagnosed with Alzheimer’s some time ago and as the seasons marched unwaveringly forward, so too had his disease.

In the nursery, I’m quite used to seeing people in all stages of dress: formal, informal, from just out of the high-rise corner office to morning pajamas with garden boots. I rarely notice what people wear because, well, being in the garden is one place to be just yourself.

Josie, over the years however, was the exception. She was one that I couldn’t help notice probably because it was obvious she paid attention to her detail. Garden shopping for her, like being in town, meant properly dressed for the part. Her beautifully grey-silver hair was urban chic, cut short and neatly stylized, and she usually dressed with some ensemble of stylish jeans and smart boots. Her bright eyes and easy smile made her both likable and with her neighbors and friends, popular.

This day, though, she came just as she was. Her hair tousled beyond recognition and her sense of detail now long lost to a larger sense of sacrifice. It was just a tiny window into the daily windstorm of what the disease brought to her life. The once important details now seemed another lifetime ago. Only her eyes, now pierced with tired tears, along with her worn smile, told me she was still Josie.

“This has been… you know… quite the test.” She hesitated. “Quite the trip. I’d do anything for him, of course, but it’s just been… well…so constant.”

I nodded as if I could even begin to understand the weight of it all.

“But we’re here today.” She added with a small sense of cheer. “I have the entire day and I would really like to spend it in the garden.”

We talked a little longer, still from a safe distance away, and then I watched her as she criss-crossed the nursery with abandon. It occurred to me that in comparison, the issues I had been worrying about seemed small and trivial. I couldn’t sit in a restaurant and enjoy a dinner, or a movie, had to wait an extra day for the supply of eggs to arrive at the store and the things I worried about like a good weather forecast and displays I needed to make didn’t even approach her scale of importance.

Yet in all of the turmoil and uncertainty, it was really the simple things she craved the most. Feeling the sunshine (or rain) on her face, having her hands in the dirt, planting shrubs and perennials and vegetables that some of it would produce heartily and undoubtedly make into her salads and top a hamburger or two.

Sometimes, the familiar and the simple things can give the greatest comfort.

Josie brought up a full box of small flowering perennials as well as a good helping of vegetable starts. “I bought out a lot of your cherry tomatoes,” she told me. “It’s something Frank can stay busy by picking them.” Even in their garden, Frank wasn’t far from Josie’s thoughts.

“Stay safe and healthy,” she called back as she left.

Josie could have easily succumbed to the pressure of being the sole caregiver much less one during an ongoing pandemic, I thought. That she still had room to wish me well, too, confirmed my belief that superheroes don’t always wear a cape.

And with that, she was off carrying the load of plants to her car. It was her day and she was going to make the most of it.

Flag Etiquette – A Matter of Respect…