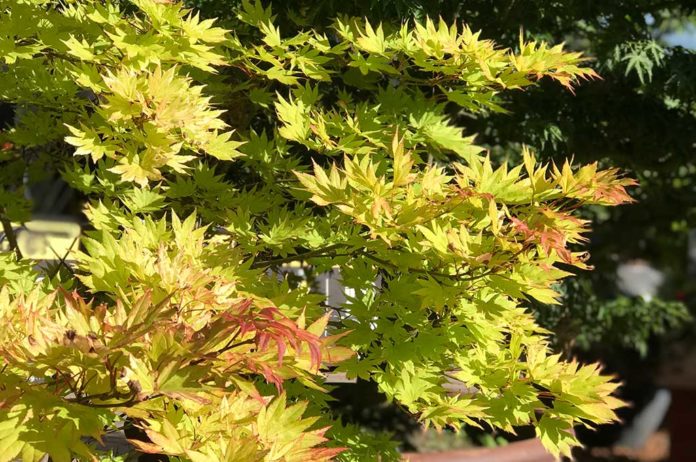 It was near closing time, the last of the crew had left for the day with a quick goodbye and “see you tomorrow” and often, I’ve noticed, with a concerned glance my way knowing that for a few minutes anyway, I would be the person in charge.

My closing duties are fairly straightforward and over the years working in the nursery it has been simplified for my benefit. Even turning off the OPEN sign, the last ritual part of my day for many years, was converted to a fully automatic electronic timer. (Confession: there were some nights I had left it on.)

So it was a nice surprise then, when in my closing routine, I noticed the troupe of gardeners talking excitedly about one plant and then just as quickly about another on a different nearby table.

There were four of them and then Judy, who had been one of my first customers the year we opened the nursery nineteen years ago. Back then, Judy was a fairly frequent visitor and she always moved with a purposeful intent (but never rude) and she was always quick with a smile and easy going laugh of an experienced gardener.

This time was no different. The “troupe” I learned was very much Judy’s tribe – her granddaughter and helpful husband, their seven-month old boy (Judy’s great grandson) and for lack of a better familial term: the mother of Judy’s grandson-in-law.

Just as soon as I was learning the relationships of this varied band they vanished to their respective gardening preferences: Granddaughter and grandson-in-law off to the indoor succulents and planters (with great grandson and mother-in-law in tow) and Judy with her usual purposeful intent scanning and moving to the next blooming perennial.

Only this time, Judy was pushing a well-used walker, though with an elegant ease of a skilled Olympian.

“Take a look at these blooms!” She called out to no one in particular as she quickly whisked it away off of the table and onto what should have been the resting seat of her walker. Within a few minutes her walker was full and grandson-in-law came to unload it into a proper wagon.

And the group moved together and suddenly separated like this until well over three wagons full later. Varied vegetables, succulents of all kinds, perennials, anything with a hint of interest Judy would whisk into her walker only to be momentarily stopped to have it unloaded.

In all of this gardening commotion was Judy’s sense of quiet urgency.

It was hard for me to keep up with her so I spent some time with her granddaughter who uncannily shared her grandma’s purposefulness. “I want to plant this container while we’re here,” she told me. “Can you show me a bit how to put all of these together?”

Even her great grandson at seven months squirmed and twisted to keep things moving.

“She made it a point to show us this place today,” Grandson-in-law told me later. “She’s been coming here every year and if you could see her garden, you would notice the  resemblance.”

“Oh tell him about the tree!” interrupted granddaughter.

The tree was a small upright Japanese maple bought when we first opened, during one of Judy’s trips and it had steadily grown over the years to become the focal point and Judy’s pride of her garden. Apparently, the story was told to everyone in the family.

“I have to tell you though. Grandma has stage 4 cancer. She wanted us to see your place but also she wanted to see through, before something happens, that her garden is finished.”

The shock numbed me but suddenly the lateness of the trip, the urgency, the family, particularly great grandson attending, made some sort of sense.

“I hope you’re going to be a gardener and love plants.” I overheard Judy telling her busy great grandson. Before she left, I helped her into the car and she retold me the story of her Japanese maple.

“I’m lucky,” she said. “I got to see spring and now summer.” I wished I had better words.

The next day however I delivered her plants. I wanted to tell Judy I appreciated her visits and I wanted to hear more of how she created her garden. Except she wasn’t to be found. The trip to the nursery had tired her out. Instead, I got a complete garden tour from granddaughter and grandson-in-law, who took time to show me each plant. It was a wonderful delight. I couldn’t help but think back to each of Judy’s trips to the nursery over the years.

And I saw the majestic Japanese maple that was growing happily in the very center of a lush and beautiful oasis of a back garden. It stood there in the shade, strong and bright and happy overseeing hydrangeas and hostas and a cool pond complete with koi.

In a way, I thought Judy’s tree was the bridge between one generation of gardeners to the next and perhaps the next after. It carried the memories of Judy’s growing garden, her trips, as well as her family. And without realizing it, her tree carried my memories with it too.

Tualatin football will be led by talented skill players

The 1980s: Big Growth for Tualatin

What is the State of Tualatin’s Employment Market?

Tualatin football will be led by talented skill players