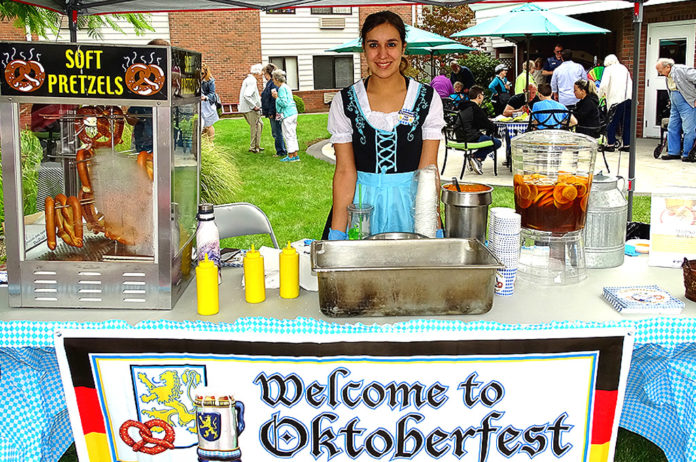 On Sunday a small but vibrant Oktoberfest celebration took place at King City Senior Village, but this year the annual celebration took on a new twist. Twenty-five shining Mustangs lined the street, and their owners mingled with the crowd of King City regulars. The car show brought in some other new, younger visitors to the event, which, according to resident Sandy Marsteller, was why this year Oktoberfest mixed with Mustangs.

“We put on a car show which brings in people you wouldn’t get,” she said. “People driving by would see Mustangs and see what’s going on.”

The Mustang Wranglers were happy to take part. They are a local Portland area group who love Mustangs, go to shows in the region during the summer, and get together socially during the year. This event was special for them because entering was free; most shows require a fee for participation. Three of the participants were King City residents.

Another reason the Mustangs were a part of this year’s Oktoberfest was because Mustangs help bring back memories for residents. “For some of these residents this could have very well been their first car,” said Debbie Hartvickson, Director of Marketing for King City Senior Village.

This was just the case for some car owners, whose Mustangs were their first car. Janice McCombs bought her 1978 Mustang when she was 18. “It was my daily car until I had kids,” she said. Now she takes it to shows around the area. “I like talking to other car owners enthusiasts and sharing my story.” Taking it to the King City Senior Village Oktoberfest gave her chance to share her love of Mustangs with a new group of people.

Robert Tresente bought his 1965 Mustang when he was 17. “It was a car and it was a convertible,” he said. It was his everyday car through high school and college.

Many people said the Mustangs helped give Oktoberfest a new feel. “The cars are something that hits home, people share a personal connection and good experiences’, said JJ Koll, Executive Director of King City Senior Village.

This was true for both Mustang owners and attendees said Mustang Wrangler member Richard Irish, who has a 2003 Mustang Cobra. “We like going to senior centers and retirement homes. They enjoy seeing our cars, but more importantly, we enjoy them telling us about the cars they drove in their glory days.”

This was the 10th year for the Senior Village Oktoberfest. Food, cars, and socializing were spread out through the area, with about 150 attendees. “Definitely up from last year and the Mustangs were a big draw,” Hartvickson said. People of all ages mingled and made new friends. “It really brought the community together,” she said.

Expect more fun next year. The Mustang Wranglers will be back. And by request, an Oompa band!

Help Available For Chronic Pain and Many Other Conditions