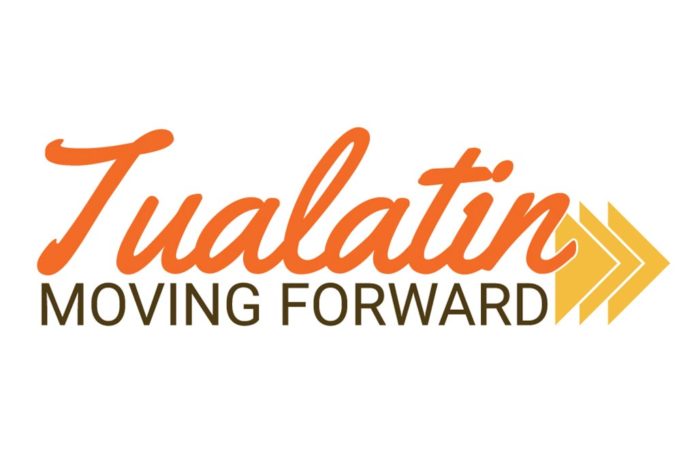 A flurry of projects is underway across Tualatin that are aimed at improving traffic flow in the city and increasing pedestrian safety near schools and in neighborhoods.

Tualatin Moving Forward, which is funded by a $20 million bond approved by voters in 2018, has completed five projects so far and many more are in the design and planning phases, Public Works Director Jeff Fuchs told the City Council Feb. 10 during a quarterly update on the program’s progress.

One big project, which is currently in the preliminary design phase, seeks to ease traffic on Tualatin-Sherwood Road from Martinazzi Avenue to I-5 by restriping the existing lanes and extending the third eastbound lane. Construction is anticipated to begin in early summer of 2021 and end in the fall of that year.

“The city is working with ODOT, which owns a portion of Tualatin-Sherwood Road, on a traffic analysis to look into how the project may affect the I-5 interchange about a quarter-mile away,” Fuchs said.

“It sounds kind of funny when we’re talking about reducing congestion,” he said. “But what ODOT is concerned about is, as we reduce congestion and save travel time on Tualatin-Sherwood Road, what does that do to mainline I-5 and what does that do to the interchange – because we’re basically letting people get on the freeway faster.”

For 2021, the city anticipates completing roadway and pedestrian-bike improvements to the Garden Corner Curves; the addition of sidewalks to 99W that connect to the Pony Ridge neighborhood; the addition of a traffic signal at Martinazzi Avenue and Sagert Street to replace a four-way stop; and traffic safety improvements at 95th Street and Avery Street near Tualatin Elementary School.

Among already completed projects are the addition of signs that tell drivers how fast they are going on Avery Street between Boones Ferry Road and Martinazzi Avenue; midblock crosswalks with pedestrian-activated beacons on Ibach Street near Ibach park and on Sagert Street near Atfalati Park; and intersection upgrades and beacons at Boones ferry Road and Siletz Drive.

“This has been a labor of love for a lot of people for a long, long time,” Councilor Paul Morrison said. “And now to see it all come together, it’s just really exciting. And I love the transparency you’re giving to the whole endeavor.”

For more information about ongoing projects and projects that are planned – or,
to suggest a project – go to the Tualatin Moving Forward website at tualatinmovingforward.com.

You can be a charter member if you join VFW men’s...

The Return of a Legacy. Regatta Run Returns for Eighth Year