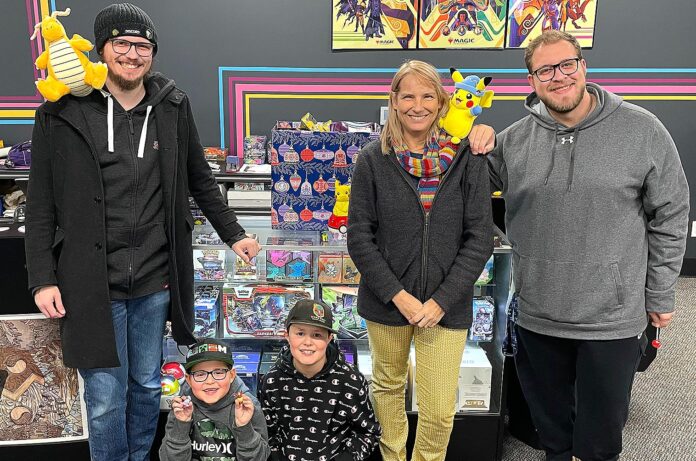 The toy drive, which Ringhoffer hopes will amass more than 1000 cards and accessories, is a pay-it-forward act of gratitude for the hospital staff and the kindness of a family friend who brightened his young son’s recent stay.

“It’s the least I can do for the kids who are there and for OHSU that saved my son’s life,” he said. “That’s why I’m doing it, and that’s why I teamed up with Reality Break.”

Ringhoffer and his boys, Julian, 9, and Jesse, 6, have a Pokemon bond so deep they’ve turned it into a small family business. The trio’s frequent buying expeditions often lead them to Reality Break, where they’ve become tight with the owner, Isaac Hascall.

The cards hold a special kind of magic that’s carried the family through their most difficult times.

As a full-time single dad, Ringhoffer found reigniting his childhood passion for the game was the perfect way to spend time with his kids doing something together that they all love. It was a connection that took their minds off of hard things as they navigated the turbulent changes of divorce.

When their hobby began blossoming into a little eBay side-hustle, he began teaching the boys about researching cards and packaging items for shipping. Their Pokesons003 eBay store now has more than 100 followers.

Pokemon saved the day a second time last fall when Jesse was hospitalized after a common childhood virus rapidly escalated into a terrifying inflammation in his eyes and around his spinal cord that impaired his vision and made it difficult to walk.

“What he has is so rare that there are only two doctors in all of Oregon who deal with this,” Ringhoffer said of the diagnosis.

Jesse had barely left his hospital bed when a family friend and her young daughter stopped in for a visit armed with flowers and a fresh pack of the boy’s beloved cards.

The allure was enough to get him on his feet. He moved to a sitting area where the two kids pulled cards and brokered trades, and for a beautiful few moments, the hospital disappeared into the joy of Pokemon.

“I had tears running down my face because he had completely forgotten he was in the hospital. You could just see the joy. It just made me so overwhelmed, and relieved for a couple of minutes,” he said. “If I can make one family feel the way I felt for that one or two minutes, that’s all I want this Christmas.”

Jesse is now back at Bridgeport Elementary with his older brother and has almost fully recovered from the illness that could have escalated to permanent vision loss and paralysis. His hospital stay was less than a week, but his dad knows some families aren’t so fortunate.

“I’m thankful that we were only in there for a few days, but there are kids who are there to stay (for a long time) and kids who won’t leave,” he said.

Teaming with a shop he loves to spread a little joy was a no-brainer.

Reality Break, like the stores he frequented as a kid, breaks open card packs so customers can fill in missing gaps in their collections. The big box stores lock up their Pokemon collections, and the only option is buying packs whose card contents are a mystery.

“One of our biggest focuses at Reality Break Games is people,” Hascall wrote in an email about the donation drive. “We want to share our love and passion for card and tabletop games with the community. This year, we were fortunate to meet Jared, who sparked a little extra holiday magic and love.”

“We will be selling tabletop accessories and booster packs for Magic the Gathering and Pokemon if you’re not sure what to get,” Hascall said. “Please feel free to bring in anything else. Every donation counts, big or small.”

Housing production strategy aims at preserving existing stock as much as...

Mix It Up at the Blender Dash!