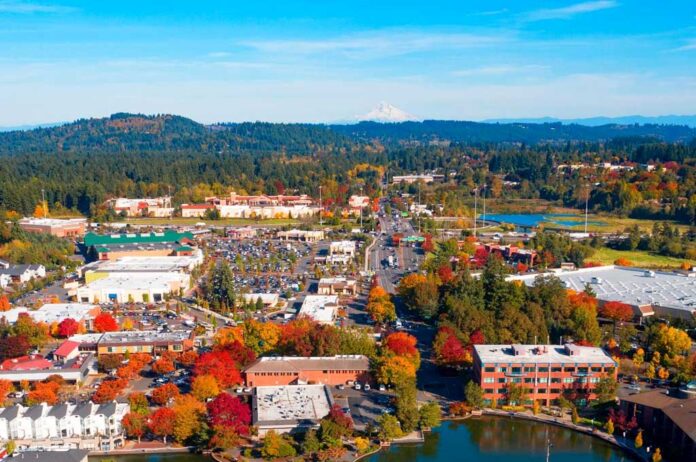 The City of Tualatin is slowly moving toward the creation of new urban renewal districts in the heart of the city, as well as at its outer edges.

For the former, the city is currently seeking a consulting team that would help develop a vision for the proposed city center district, along with a land use and transportation plan that would ultimately be funded by tax money generated by the district.

It’s part of a wider expansion of urban renewal across the city, which also includes an amendment to the longstanding Leveton Urban Renewal District as well as ongoing work to create a new urban renewal district in the Basalt Creek and Southwest Industrial Concept Area on the edges of the city. A public hearing is tentatively scheduled before the Tualatin City Council on Aug. 23 to consider adoption of this district, which could provide from $28 million to $55 million in tax increment financing (TIF) revenue over 30 years. That would pay for new roads, sewer, stormwater and other infrastructure, acquire property and support development in the Basalt Creek and Southwest Industrial areas.

When it comes to the city center district, the council will be conducting public outreach over roughly the next year to determine what the boundaries of that future district would look like, what types of transportation and other infrastructure improvements are needed and what kinds of development are best suited for the area.

“We did a feasibility study of the area and we showed that there is significant financial capacity here,” Nick Popenuk, a land-use planning consultant and CEO of Tiberius Solutions, said at a June 28 city council meeting. “But the city council suggested that before we move any further on this, the area really needs a cohesive vision that everyone can unite around. It’s great to have capacity, but in order to know where you want to spend it, having that vision will be crucial.”

That visioning process has largely been completed with the Basalt Creek and Southwest Industrial Concept Area and the city is moving toward adoption of a new urban renewal plan for its 700 plus acres. But in the city center, there is no consensus on what the area should look like, nor what types of improvements it ultimately should include.

At the June 28 council meeting, councilors directed city staff to craft a Request for Proposal (RFP) seeking a land-use planning consulting firm to help lead a visioning process that will help answer those outstanding questions. One of the biggest issues to resolve will be determining future boundaries for this district. The area currently under study includes the central city downtown core, as well as a swath of property to the north that straddles Interstate 5 and includes the Bridgeport Village mall. As proposed, this area could provide an estimated $248 million to $362 million in TIF funding over 30 years.

Popenuk told the council that these boundaries are not set in stone but noted that a larger district would give the city more financial flexibility over the long term for funding infrastructure and redevelopment.

“When you look at the particulars of the public outreach,” he said, “there’s a chance to refine the study area and say, ‘You know what? Let’s only focus on these areas west of I-5,’ or whatever the case is if you think it makes sense to focus on a smaller area.”

For their part, councilors do not seem enthusiastic about including the Bridgeport Village area in any future district.

“I just don’t want to waste time and dollars and resources on areas, and I’ll pick on Bridgeport,” Mayor Frank Bubenik said. “In my mind, in the near future, Bridgeport being included in an urban renewal zone? I mean, come on.”

Councilor Cyndi Hillier noted that there is value in at least gathering information from property owners in the area.

“Because enhanced connectivity is one of the identified priorities,” Hillier said. “I see why it would be important to at least get input on this. I agree we need to be appropriate with our resources, but that is one of our goals.”

Popenuk said the coming public outreach and engagement process will take the better part of the next year, starting with the selection of a consulting team this summer.

“It would be a lot of technical work to lay the foundation for what the area really is today and what the existing plans are that have a bearing on how it will develop in the future,” he said.