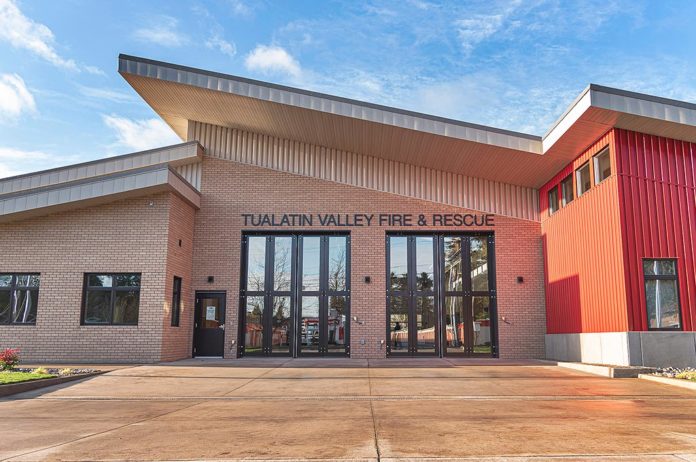 The goal of the new station is to improve response times in Tualatin east of I-5 and in the nearby communities of Rivergrove and Durham, as well as the Bridgeport Village area, said TVF&R spokeswoman Kim Haughn.

“We’re constantly reviewing our data, and that’s what really informs a lot of our deployment,” she said. “We noticed we needed to strengthen our response times in this area.”

Crews at Station 39 started responding to calls on Jan. 21. Soon after the station opened, TVF&R Captain Pete Godon and Firefighter Bruce Opsal responded to a 9-car pile-up on nearby I-5.

“We came in, blocked the lane to keep everybody safe, and Bruce got out and started triaging, working through the cars. It ended up being a non-injury [accident].”

The station is staffed by three rotating crews, each consisting of a captain and a firefighter. A crew will be on duty for 24 hours and then off for 48. A battalion chief also will be assigned to Station 39.

“Since it is a new location, there are a lot of things we need to figure out – response areas, hazards – and so we hand-picked the crew who came here,” Godon said during a recent Saturday shift at the station with Opsal.

“It’s exciting,” Godon said. “Everybody likes being at a newer station.”

The single-story station is on a 1.16-acre site at 7080 SW McEwan Road. Construction began in December 2018 and took about a year to complete. Station 39 includes some office space, bunk rooms, locker rooms and restrooms for men and women, a gym, a common area and a kitchen. The firefighters assigned to the station handle most of the cleaning in and around the station as well as the cooking.

“Some of the best cooks are firefighters,” Haughn said. “You have to be a good cook. If you aren’t, you’re going to have to learn.”

Station 39 was designed with the future in mind, Opsal said. There is room to house larger crews of firefighters, and the bay is large enough to accommodate larger vehicles.

Some unique touches at station include TVF&R’s first solar array for alternative energy, folding doors for the vehicle bay (rather than rollup doors) and a workshop off the bay that includes a washer specifically for turnout gear – the protective clothing firefighters wear on calls – and drying racks with exhaust vents that pull any carcinogens and contaminants out of the station. There’s also a community room, the ceiling of which features wood that was harvested from trees that were on the site.

In the vehicle bay, there’s a 4-wheel-drive brush rig (called a “squad” by TVF&R crews) that is outfitted with a 260-gallon water tank that can be resupplied as needed, 1,600-feet of hose, air tanks, medical equipment and hand tools for all kinds of situations.

Because of the vehicle’s smaller size, “We can get into places that engines can’t,” he said. “We can work up through trees, anywhere we need to go.”

The bright red rig is well-organized and the crews keep it immaculately clean. The same is true of the fire station itself.

“We’re stewards of public property. None of this is ours – it’s yours, and so we need to make sure we take care of it,” Godon said. “A lot of people make fun of us for keeping the rigs super clean. Part of that is making sure all of the equipment is on it and it works.”

Outrun the Rain in Tualatin!