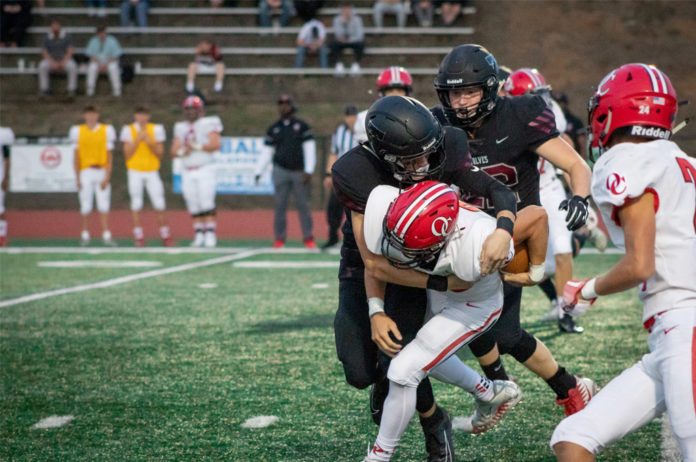 In the second game of the season, the Tualatin Timberwolves emerged victorious against the Oregon City Pioneers. They took them by storm with a final score of 35 – 13 and a lead of 22 points!

It might have sounded like an easy win for TuHS by looking at the score, but the game was much closer. The first half had only ended with scores of 12 – 6 and Tualatin a touchdown ahead.

The Tualatin Head Coach, Dan Lever, put it best when he said: “The game itself was a fistfight in a phone booth that first half. Hats off to Oregon City, and the way they competed.”

The teams were at each other’s toes when attempting to make any headway on their competitors, but with the number of penalties and turnovers that emerged, neither could make a move. This lasted until Oregon City caught a glimpse at the lead.

They managed to get their first touchdown at the end of the third quarter, also snagging the lead with 13 – 12.

The Tualatin student section went silent. Everything suddenly seemed lost for Tualatin High School as they kept the lead up until that moment. This seemed like the point where Oregon City leaps ahead.

Tualatin’s #7, Luke Marion, didn’t seem to like that idea and took things into his own hands.

The Pioneers were only 20 yards from the end zone, and with a quick pass hoping to gain an even higher upper hand, Marion casually snagged the ball out of the air.

He didn’t just stand there either; he ran, and ran, and ran a bit more. Dashing 86 yards in total, this scored Tualatin their much-needed touchdown.

Not three minutes later, Marion received the ball at the 46 from a fellow Timberwolf and once again, ran the distance. This secured their lead with six minutes to go and now a 13-point lead.

Tualatin also managed to pick up a fumble from OC on their 10-yard line with three minutes to go and thus resulted in the final touchdown for Tualatin.

However, this was only their second game and win of the season. The team had a lot to learn from the poor experiences of the game before they could continue.

“We just have to clean up the penalties and turnovers,” Lever said. “The game was a lot closer than the score was.”

Parenting with the End in Mind