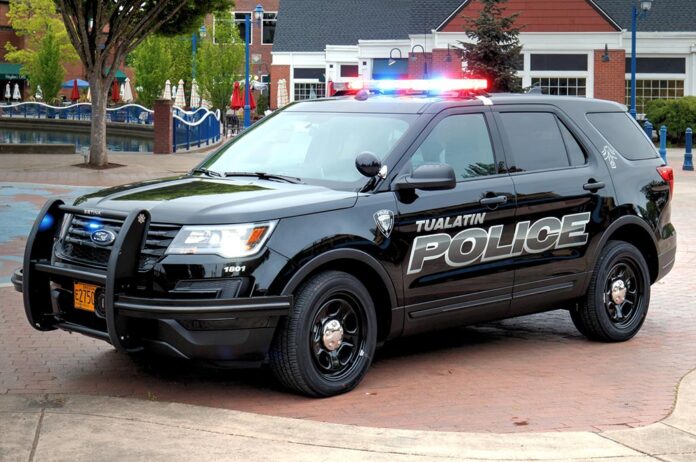 The killing of George Floyd by four Minneapolis police officers last May caused waves of revulsion throughout American society and has spurred hundreds of cities to examine policing practices and standards.

In Tualatin, Mayor Frank Bubenik and the City Council have signed the Reimagining Police Pledge created by the Obama Foundation and its offshoot, the My Brother’s Keeper Alliance. As part of that pledge, the City is hosting a trio of public conversations to discuss the Tualatin Police Department’s use-of-force policies and make changes, if the Council decides it is needed.

Tualatin Police Chief Bill Steele, Captain Greg Pickering and Sergeant Chris Turner all took turns explaining their department’s use-of-force standards and practices at the first of those virtual conversations, held on Oct. 14. They also fielded a series of questions from those attending the virtual meeting on topics ranging from racial profiling and deadly force to psychological examinations and mental health checkups for police officers.

One key fact in the discussion, however, was brought up early when Steele discussed the concept of “reasonable” use of force as embodied in the landmark 1989 U.S. Supreme Court case Graham v. Connor. This case requires courts to consider the facts and circumstances around an officer’s use of force rather than intent.

“What is reasonable?” Steel asked. “If you’re expecting a bright line rule – I’m afraid you’re going to very disappointed, because there are a lot of facts and circumstances that go into determining what is a reasonable use of force.”

These can include the severity of the crime being investigated, whether or not a suspect is fleeing or armed, the size and age of a suspect, the number of officers involved, possible drug or alcohol use and many more.

This, in part, is why there is a five-step use of force policy in place in Tualatin and most other departments that officers use in response to various situations.

Steps range from simple officer presence, with no force used, to verbal commands such as ‘Stop!’ or ‘Don’t move!,’ to empty hand control involving bodily force to gain compliance. After that, so-called “less than lethal” tools such as batons or pepper spray are used, followed by lethal force that normally involves firearms.

“Unless we know the arrest is unlawful, it allows us to defend ourselves or defend a third person,” Sergeant Chris Turner said.

One problem, however, is that these policies don’t take into account how to handle the homeless or persons with mental health problems.

“What’s not captured here,” Steele said, “is how to handle the homeless or people with mental illness situations. It isn’t necessarily coming from the law itself.”

This is an area where some agencies, such as the Eugene Police Department, have looked to use outside agencies to respond specifically to those types of calls. In Eugene, for instance, the Care and Helping Out on the Streets, or CAHOOTS, program is nationally recognized for using unarmed responders to deal with the homeless and mentally ill.

In Tualatin in 2020, Steele said, the agency has recorded 87 threshold events, or incidents where use of force could have been justified but was not used. There have been 29 actual use of force incidents.

The last incident involving use of lethal force by a Tualatin officer was in 2019 when Tualatin Police Detective Kevin Winfield, a 28-year veteran of the department, was among officers from multiple agencies involved in shooting a suspect near Hagg Lake.

Prior to that, Tualatin officers were involved in two shootings in 2016.

“It doesn’t happen frequently in our local area,” Steele said. “I’m proud to say the way law enforcement operates in our local area is a higher standard of what you see in the rest of the country.”

How Complicated Can Medicare Be?

When Diet and Exercise Fail…

Serving our Community in a Special Way