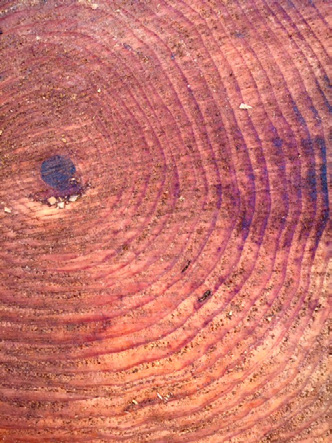 I cut down a big tree on our property just the other day. It was a once magnificent Douglas fir that stood just short of 100 feet tall. It was the kind of tree that when I hugged it with my arms outstretched and my face smooshed against its rough bark my hands still had no chance of touching.

I actually didn’t cut it down myself. I’m not that brave. I did however watch intensely as a called-in expert Tom climbed fearlessly and almost effortlessly upwards. He cut limbs as he climbed and then dropped them expertly with pinpoint precision to the ground below.

As he neared the top I could see the tree sway with his added weight. He stopped for a short moment and looked around. The view Tom and the tree had must have been beautiful.

On the ground, watching the scene however, I was overcome with a sick sense of vertigo. My palms began to sweat. “How isn’t he crying with fear right now?” I whispered under my breath. I sipped again on my latte.

Less than 20 minutes later though Tom was finished. The tree lay strewn about in large ten-foot sections and the last bottom trunk of it sat defiantly now just the height of a lazy boy chair.

“I’ll do the cleanup and I can chop and use the wood.” I told Tom. I shook his sweaty hand, said thanks and gave him his check.

It was a few days later during the quiet of a winter morning that I revisited the fallen tree. I couldn’t help but notice the remarkable deep color of the wood and the thickness of its protective outer bark. In my curiosity I counted the rings.

Turns out to my surprise that my tree and I were of the same age.

Did someone long ago plant it purposefully there or did it sprout from a seed? My birthday is in April and I knew it couldn’t have sprouted during the cold winter months. Could it have sprouted that spring while my Mom and Dad brought their fourth child home?

And while I was learning to walk, the tree must have grown to be a determined seedling.

I counted to its sixth ring. That was the birthday when I got my first transistor radio. I remember it vividly because while my birthday landed on a Thursday we celebrated it on the following Sunday. It was a dry, cool day, that I know, because it was also the first time I was able to go to church. I felt like one of the big kids that day. From the looks of the strong, easily pronounced ring, my tree must have had a good day too. It, and I really grew that year.

And so it went. One day following another. Season by season. Year by year.

In seventh grade I had taken an ad out in our local newspaper. I’d help garden for $2.50 an hour. My mom stayed busy answering the phone and keeping my schedule. My dad did some quick math and offered a deal of lifetime. For every dollar earned he would contribute an equal dollar. If I saved enough I could use the money for a trip to Holland. I remember every detail of the trip, (including a girl named Inge.) I counted my tree’s rings for his year while I was away.

And of course I counted the ring where my tree and I met. Where I first discovered it from afar but then after cutting away wild berries, where we met up close. And I thought about how I dug just under a root of his to sneak in an irrigation pipe.

And I thought of just a few years back how that tree helped me design a bracket to hang a hanging basket. I pondered how to attach a bracket without drilling into it and also allow my tree to grow and expand without being constricted. We created a YouTube video together to celebrate the moment. (Complete with David Cassidy’s song “I think I love you”)

I’ll be renting a backhoe here shortly to pull up its mighty trunk and roots and besides a small sliver of the tree for remembrance, my tree won’t be any longer. I’ll definitively plant another however. It’s another start. A new beginning perhaps for someone else to meet and contemplate and maybe make the world a better place. For me now, I won’t be able to see a tree in the same light.

Jonn Karsseboom gardens and then writes, blogs and produces videos of his experiences to anyone willing to listen. Sign up for his newsletter at www.thegardencorner.com.

Jennifer Vranizan: A story of courage.