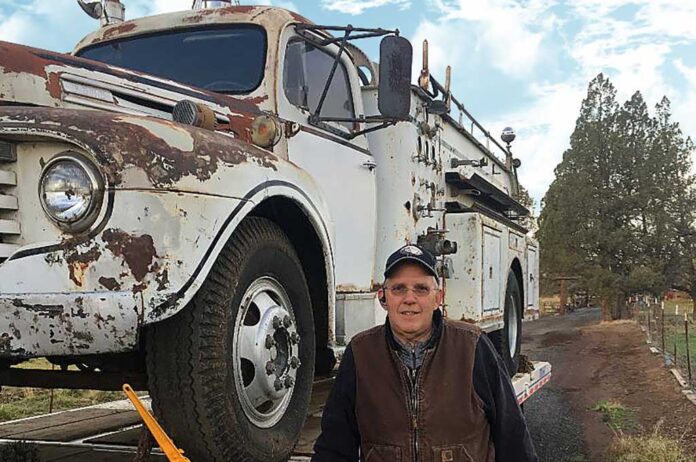 Rusting away in a farmer’s field near the small central Oregon town of Terrebonne, a vintage firetruck that once served Tualatin has now been restored and will be on public display for the first time Saturday, August 7, across from the police station at Tualatin Heritage Center from 11 a.m.-2 p.m.

Accidentally discovered by retired Tualatin volunteer fireman Brian Clopton several years ago, he and a “band of brothers” carefully restored the 1950 truck that served the city and surrounding areas until modern equipment was gradually added.   Tualatin’s fire department served as the catalyst for today’s largest fire district of its kind in Oregon: Tualatin Valley Fire and Rescue (TVFR).

Families are invited to inspect the restored truck and also visit a modern engine parked nearby.

Several volunteers who served or worked on the old truck will also be available to explain its operation.  One of those was Kelvin Staven, who made sure the restoration was period correct.  Goodies for the kids will be available from TVFR, and today’s active engine will be on standby if needed to respond to a call.

Tualatin’s original small volunteer firefighters worked with older equipment in a “lean-to” attached to the old city hall just south of the Gyros to Go building near Boones Ferry and Tualatin Sherwood Road. As the town grew, the Tualatin Rural Fire Protection District was formed, and a new station was built on Seneca Street not far from the Lake at the Commons and Winona Grange, with new ones added later.

Today’s TVFR now operates from 23 stations and responded to some 50,000 incidents last year in much of Washington County and surrounding areas. Brian served on the TVFR board for many years.

The history of Tualatin’s fire department has been chronicled in a book coordinated by Yvonne Addington, former city manager, whose father served on the board when the vintage truck was used.  The book will be on sale that day.