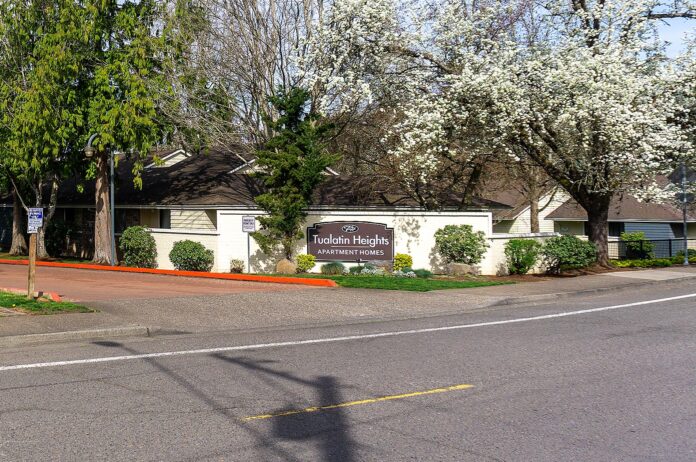 After more than four hours of discussion and public testimony, three meetings, and two votes, Tualatin City Council greenlighted a zone change request that clears the way for Tualatin Heights Apartments to infill more than 100 new units, upping its density by nearly 50 percent.

The ordinance, which passed in a split 5-1 vote on Feb. 28 after failing to win the unanimous approval needed to clear the first reading at and meeting earlier in the month, was the first test of a recently adopted land use ordinance that relaxes restrictions on multi-family housing development.

Under Oregon HB 2001, the middle housing bill engineered to meet statewide demand for affordable housing, the City Council could deny the request only if it deemed rezoning the property to not be in the public’s best interest.

“This is a code change that is very specific, and I do want to say that for me ‘public good’ is having housing opportunities for people in our community,” Councilor Bridgett Brooks said before voting to approve.

Mayor Frank Bubenik and councilors Cyndy Hillier, Christen Sacco, Valerie Pratt also gave the change a thumbs-up, despite expressing   reservations. Maria Reyes, who spoke in favor of the change at an earlier meeting, was absent.

The sole dissenting vote came from Council President Nancy Grimes who continued to question the assertion that higher density zoning at Tualatin Heights is in the best interest of the public.

“I think (the presentation) really fell short (in illustrating that the change is best for the public),” Grimes said. “If anything, we’ve heard extended testimony from homeowners and neighbors in the area that this does not protect – in any way, shape, or form – the public interest.”

The complex at 9301 SW Sagert St. is bordered by residential neighborhoods on two sides and industrial areas on the other two.

A handful of residents submitted written comments and voiced opposition to the expansion during both sessions of the hearing, citing existing issues with limited parking and insufficient garbage and recycling receptacles. Adding units, they said, will eliminate green spaces and drive more residents and their guests to park on neighboring streets.

“All of these issues are in the public interest but to me, housing is the bottom line, most important issue,” Pratt said.

While shifting from a medium-low to medium-high density zoning designation allows Tualatin Heights to expand from 220 to 336 units, development plans for the addition must pass an architectural review and traffic impact study before construction could begin.

During an initial hearing at the Council’s Jan. 24 meeting, representatives of Angelo Planning Group presented a conceptual plan on behalf of the apartment complex’s owners. City planners backed the change, saying it aligns with Tualatin’s housing goals.

The new units would fill a shortfall in medium-high density housing identified in a 2019 housing analysis, but Grimes questioned Tualatin Heights’ suitability for expansion, asking if the city would be better served by looking elsewhere.

“Would it be better to look at Basalt Creek for meeting housing needs than trying to jam it all into a 50 percent increase in this one area?” she asked. “I feel like (the developers) haven’t met the burden of what we ask in our own code for redevelopment.”

Police Chief is retiring after a job well done

Tualatin Library eager to reopen to the public