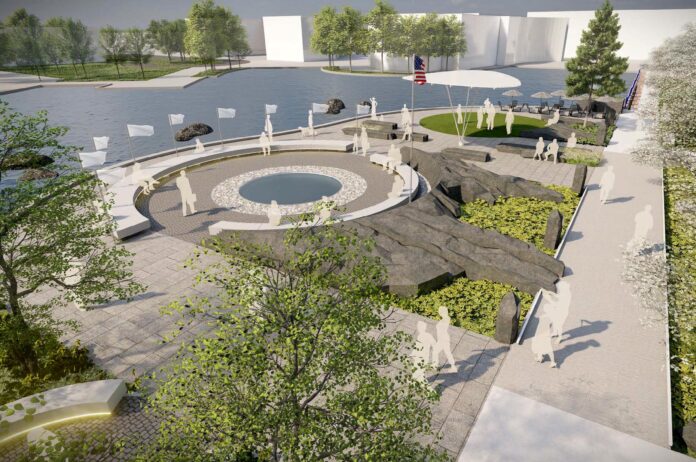 Inclusivity and flexibility are the hallmarks of a freshly approved draft design for the new Veterans Plaza at the Tualatin Commons.

City Councilors at an August 8th meeting voted unanimously in favor of accepting Portland firm Shapiro Didway Landscape Architect’s vision for the site, though final revisions are still to come.

“It feels like a gathering place for all, from what we’ve seen on paper so far,” Councilor Christen Sacco said. “I really appreciate that sensitivity to our entire community.”

Sacco, who is also Vice-chair of the Tualatin Parks Advisory Committee, has attended meetings for the Plaza since the start of the three-year process.

Using feedback from more than 1550 people who have participated in community outreach events, surveys, and focus groups since the idea’s inception in 2019, Shapiro Didway laid out a Plaza replete with gathering spaces, public art, and plenty of opportunities for varied rotating groups to temporarily hoist their flags among permanent sculptures that will pay homage to each branch of the military.

Architects drafted three renderings, presented them to the public then culled the most popular elements from each to create the present design.

The initial drawings were presented through a virtual open house and survey in which 77 percent of the 206 respondents were veterans.

Nearly 60 percent favored naming it Veterans Plaza rather than Veterans Memorial, to ensure the park will honor all service members, past and present, living and dead.

“We heard from them that it needed to be a space that had visual entry areas, gathering spaces, shaded areas, intimate group spaces, benches and tables, QR codes for accessing information, places for storytelling, connectivity to access around the lake,” landscape architect Nate Otani said. “Public art was very important, (also) selection of natural materials and native vegetation, and that the space is simple, intentional and very inclusive.”

The community requested quiet spots for reflecting in solitude balanced with spaces that can comfortably hold parties of 30 to 50 during events.

Otani and his firm responded with a drawing that incorporates a reflection pool, a series of stone columns that will each bear the logo of a different military branch, and a series of 10 flag poles – a central pole on which the United States and POW/MIA flags will fly daily, and nine others arching behind it where organizations like the Gold Star Mothers of Veterans of Foreign Wars can hoist their own when they’re using the Plaza.

The team initially considered a permanent set of flags, but there was little consensus on which should hold those spots.

“It became very apparent, very quickly, that defining the flags would leave groups out, and would leave particular people’s concerns about full representation out of this plaza,” Otani said. “So the concept (shifted) to allow anyone to fly the flags for their particular activity or event.”

Similarly, QR codes throughout the space will be flexible, linking to information and stories that change to highlight perspectives connected with specific events, holidays, or gatherings.

Visitors entering from Seneca Street will pass through an area strung with lights and decorated with Service inspired art, welcome signs and QR codes, while the Nyberg Street access will have a labyrinth, benches for seating, native trees, and lighting components meant to pull visitors into and through the site.

“There’s been such a thoughtfulness about this project,” Councilor Bridget Brooks said. “There are a lot of details here. There’s a lot of work that’s gone into this. I don’t anticipate that every single person is going to be on the exact same page all the time, but what I do anticipate is an amazing Veterans Plaza right here in the heart of our city.”

Funding, which has not yet been solidified, could come in part from a $25,000,000 Parks Bonds up before voters on the November ballot.

Tualatin is Moving Full STEAM Ahead for $3 Million

Tualatin High graduate aims at a future in politics