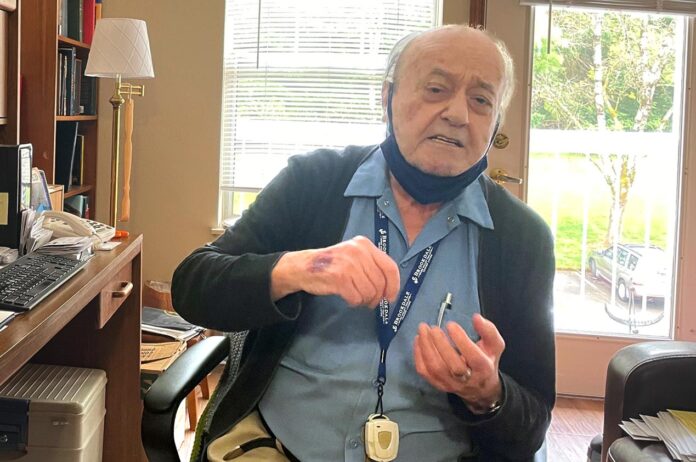 Inside the small living room of Antonio Nafarrate’s Tualatin apartment, every surface tells the story of his life in science.

A life driven by insatiable curiosity and anchored to a deep love for the people he holds dear, and at 85, still fueled by wonder.

“Anything that pops up, I try to solve it,” he said.

That inquisitiveness once led the retired Argentinian-born physicist to see a correlation between earthquakes and a surge in missing cats. Nafarrate noticed the number of lost cat notices in the classifieds section of his local newspaper consistently multiped just before and after earthquakes.

Geologist James Berkland, who claimed an ability to predict the seismic shifts based on a constellation of variables, later credited the missing cat method with alerting him to a 1979 earthquake along the border of California and Mexico that was recorded at the time as the largest in nearly a century.

The theory, and Berkland’s initially skeptical reception of it, are detailed in “The Man Who Predicts Earthquakes,” the book about the geologist.

Others are slower to accept both Nafarrate’s cat-quake theory and his ideas about animal navigation, the internal compass that guides innumerable species, which challenge the long-held belief that animals use the Earth’s electromagnetic field to find their way.

From the middle of a couch blanketed in research – that of both his and his contemporaries – and older work and a recently published book on animal navigation, Brookdale River Valley Tualatin’s resident physicist pulls a 1987 article he published in “Speculations in Science and Technology.”

“This was my first paper,” he said. “And attached to it is the one from two Noble Prize winners that did the same idea.”

The article, a piece called “Animal Navigation and Biological Rhythms: the inertial theory,” (Editor’s Note: You can read the piece at tinyurl.com/ynunhkpa), lays out his theory for the working of an internal GPS system that pilots animals’ highly accurate but still poorly understood ability to find their way home.

In it, Nafarrate links internal navigation to a molecule found in all animals, refuting the idea that animals use the Earth’s magnetic field to guide them.

Picking up a copy of Pulitzer Prize-winning science writer Ed Yong’s new book “An Immense World” from among the papers on his couch, he says the book, which explores the way differences in sensory perception create vastly different experiences within our shared planet for all living creatures, is good but in one area Yong “has made a big mistake.”

Birds and sea turtles, Yong’s writing asserts, detect a magnetic field beyond the reach of human senses to travel vast distances with near flawless accuracy.

“He thinks animals use the magnetic field of the Earth. Not so,” he said. “If we were to detect magnetic fields, it would be impossible to make MRIs,” Nafarrate contends. “Living cells don’t respond to magnetic fields.”

But Nafarrate laughs when he relates a story of emailing Yong with his critique.

“I sent him three papers, and I expect a reply,” he said. “He has a good sense of humor. He says if you insult him, he’s going to use the paper in the restroom.”

For all his scientific acumen, there’s nothing he appreciates more than a good sense of humor and a well-placed joke.

Friendly, funny and quick to grin, he chats easily, shifting topics from his work to his family and back.

Behind him, the desk is covered in notes and post-its, and the bookshelves are packed with volumes on physics and animal navigation, the works of Darwin and medical texts. Everything from Physics for Dummies to dense tomes by Nobel prize winners.

A patent dating back to 1994 hangs on the wall – pictures of his daughter and late wife, the framed black and white from his first wedding.

Nafarrate came to Tualatin from the Bay Area about a year ago to live closer to his stepdaughter and her family in West Linn. Another daughter, Flavia, his only biological child, moved back to Nafarrate’s native Argentina.

He spent his career working for IBM and Xerox, and teamed up with a former colleague to patent a medical alarm device that monitors multiple patients simultaneously, alerting medical staff to potentially dangerous changes in breathing or heart rhythms.

“We spent money, and we never made a penny,” he says with a laugh, “but I think we are saving lives.”