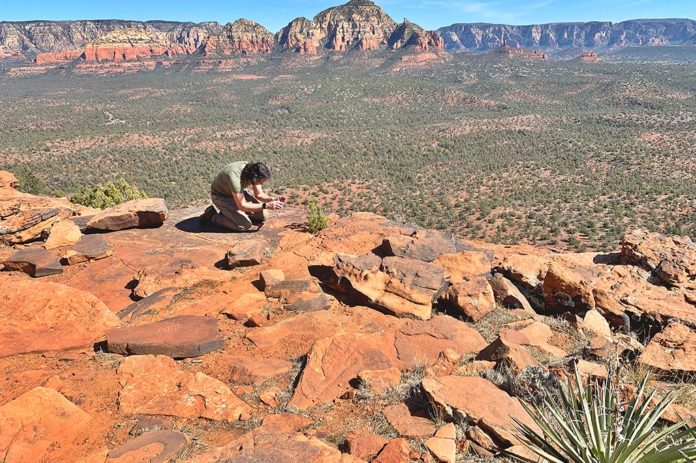 I had worn the same clothes for three days straight while hiking into the high scenic hills of Sedona Arizona (of all places) and filming various plants quite literally in the wild. But this morning, after a quick sniff of the dusty, dirty, wrinkled mass, I couldn’t bear to put the same clothes on again.

Instead, I resorted to my quick Plan B. I’d wear my one set of clothes in my suitcase reserved for the “Evening Out.” Luckily this time, I even had the foresight to pack my shiny shoes too.

At least then, when I showed up to the “Filmmakers Conversation Workshop,” I wouldn’t smell too badly.

Mind you; I hadn’t planned on attending this workshop. I was in Sedona just by coincidence during the International Film Festival, and the big brochure at the counter of the “All Fresh, All Natural Thai” fast food place allowed me enough time to jot it down. Heck, since I enjoyed taking plant videos with my beaten and horrendously cracked iPhone, maybe I could learn a thing or two from some real filmmakers.

Sedona, if you’ve never been, is a town scratched out of high dessert and walled in by astonishingly beautiful red rocks. The intensity of the views quite naturally makes all the restaurants, coffee shops and hotel rooms build windows to face them. (Even the local CVS Pharmacy built their parking lot overlooking a view.) So this morning, being one of the first to arrive for the workshop, I picked out a seat by a window with a view (and a bit of warm morning sun) just to the left of the professional cameras pointed at the head table.

I mention this because as the room began to slowly fill with all sorts of filmmakers, production people, sound specialists, talent agents, producers and the like, it was my little side table where the director Allen Farst (the morning’s speaker) hung out as well.

Never heard of Allen Farst? I hadn’t either. In fact, it was only because I had glanced at the photo on the program not five seconds before, that I realized it was him.

He was quickly surrounded by the admirers of his work, who were also professionals in the film industry. Conversations quickly turned technical. “Storyboards” and “work in post” and camera angles and particular lenses surrounded me at my table.

I was intrigued and fascinated and so terribly curious. The discussion grew intense, and during a sudden pause, I couldn’t help but ask the Director a question.

“Do you find when you film a shot that you’d wish you had filmed longer or shorter?”

It was a good enough question for Allen because he too, it seems, has had the same struggle. He went into depth recalling times he had filmed in -40 weather as well as during the heat of a desert. Maybe it was my unusual (and uncalled for) nice clothes I was wearing, but as he further explained, I got the sinking feeling that he had me mistaken for a fellow Director. And it was apparent from the others around us that they too thought the same. His fame and status of “Director,” I felt, had somehow mistakenly rubbed off on to me.

I was in way, way over my head. I could feel the growing heat under my armpits. Worse still, as he was pulled away to begin his presentation, Allen most graciously continued answering my question throughout his talk.

He began to show close up photos of David Letterman he took as well as Jimmy Carter and then showed a beautiful (and interesting) clip of Keith Richards of the Rolling Stones as well as the highly technical equipment he used to achieve the particular “look.” I thought of my cracked iPhone. Under the table, I couldn’t help but rub my hands unconsciously together. They were as slippery as wet moss.

Perhaps all of my internal drama was exactly that. Lacking any outward credentials of any kind (except being overdressed), professionals in a tight-knit group can, and at least in the documentary movie business do, assume the best. Allen was just being extraordinary generous (and kind) to a complete newbie.

I like to think the same is true in the world of the garden too. Because the planet is so large and the plants’ varieties so vast, it’s nearly impossible to know it all. New gardeners, as well as long-time gardeners, are always on a journey of learning and discovering. In other words, gardening gives everyone their fair share of humbleness.

Mistaken identity withstanding, I am glad I attended the filmmaker’s workshop. It’s hard to tell now, but I believe in the long run; I picked up a tip or two that will improve my plant filmmaking of the future.

To be sure, I’ll remember Allen Farst’s patience and generosity if I ever attend (or lead) any gardening workshop. While gardening doesn’t require any particular credentials, it’s very much along the same world of filmmaking: doing is better than saying.

I had to leave Sedona before I had the chance to see Allen’s film: Chuck Leavell The Tree Man. I’ll keep an eye out for the chance, though. If his workshop was any indication, I’m sure his film will inspire me to greater heights.

If not in filmmaking, then in gardening. I’m sure of it.

Dealing with Stress During a Pandemic

From Slum Town to Uptown: Tualatin in the 1990’s