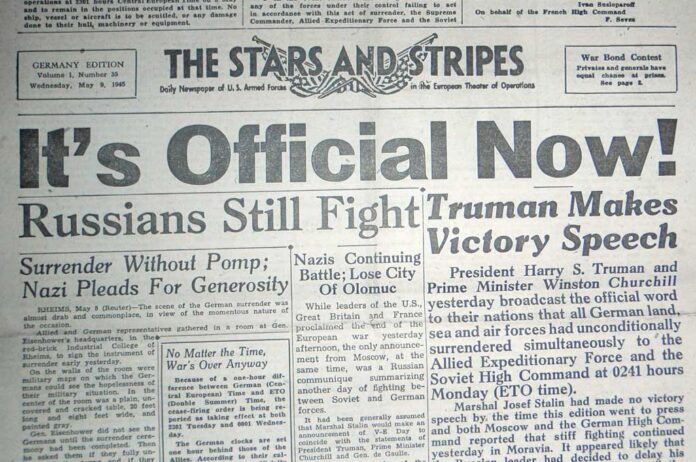 In my last column, I talked about Tualatin men who served in three different branches of the military in three wars who were either Prisoner of War (POW) or Killed in Action (KIA).  Considering that Tualatin was a small agricultural community of several hundred people until the middle of the ’70s, our community has given more than its share to preserve freedom for our country.

Long time Tualatin resident Yvonne Addington contributed to that column and has since shared some memorabilia from her family – issues of Stars and Stripes that announced the end of World War II.  Stars and Stripes is a daily newspaper that reports on matters affecting the Armed Forces.  It operates from within the Department of Defense budget but, by Congressional mandate, is editorially separate. These Germany edition copies came from Yvonne’s late husband’s uncle, Warren Van Hying, who was a printer and lifelong Tualatin-Durham area resident. These were among Van Hying’s WWII Army papers from when he served in Germany.

“Nazi’s Quit!” is the headline on Tuesday, May 8, 1945, a four-page issue. The headline itself takes up half the page.  The remainder of the page, in big print, explains that Hitler’s successor, Grand Adm Doenitz, ordered the surrender and the German High Command declared it effective. It says that “High German officers formally surrendered the German forces at a meeting in the big red schoolhouse which is Gen. Eisenhower’s headquarters, the AP and Reuter reported.”

The second page is headlined “War cost over 6 Million Lives”  A large picture has a heading “The Big Three – Their Plans pay off.” The caption then says “The three titans who frustrated Hitler’s dream of conquering the world. President Roosevelt died April 12, when victory was in our grasp. Photo taken at Yalta in January.” Although not named, the photograph also included Winston Churchill and Joseph Stalin. At that time, there was no public knowledge of additional casualties; millions of Jews, Poles and other groups in Hitler’s cleansing efforts.

One article says “Some Going to Pacific, Some Home, Others Stay”. It names three tasks ahead for the Army: occupying an allotted German zone; transferring many troops to the Pacific theater; and selecting soldiers, on point system basis, for discharge. On another page, an article describes Hitler considering himself a military genius – “Der Fuehrer undoubtedly aided the Allied cause by removing top flight military men because they could not agree with his amateur strategy.”  It explained that the ”Fuehrer operated on an ‘or else” basis – you’ll do it my way or heads will roll. It seems apparent that some of the finest military heads in the world ‘rolled’ in preference to accepting Hitler’s visionary strategy or – or failing to carry it out.”  It also had what appears to be a “Willie and Joe” cartoon of a GI with his arm cocked back to throw a live grenade and another soldier, with one ear listening to a receiver attached to a field mobile radio, saying ‘Put that pin back, Joe, the war is over”

“It’s Official Now!  Truman makes Victory Speech” is the headline on the next day’s edition, Wednesday, May 9, 1945.  (History records that Stalin waited an additional day to make his announcement, probably to allow his troops additional time to gain more territory.)  Other war news included Winston Churchill’s BBC radio announcement to the British people” to devote all our strength and resources to the subduing of Japan ‘in all her treachery and greed.’” Interestingly, the May 9 issue had regular features including “Little Abner” and “Terry and the Pirates” cartoons as well as sports news of baseball highlights including National and American League standings.

Although the actual newspapers remain in family hands, a copy of these Stars and Stripes editions is available at the Heritage Center for public viewing.

Freedom Tower: A Look Back In Time

Let Food Be Your Excuse This Holiday Season

Kick Off 2019 with Art Classes with Angie

The Easter Bunny Hops Into Tualatin Park On April 15th

Flag Etiquette – A Matter of Respect…