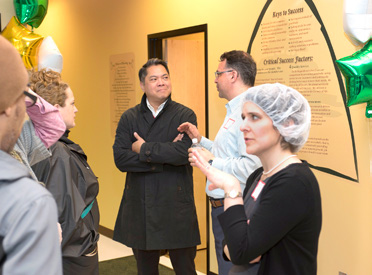 The new production facility and company headquarters is located at 19870 SW 112th Ave. in Tualatin – just off Tualatin-Sherwood Road and near Industry restaurant, which is another new business to the growing industrial area.

An obvious family man, Karam said he left his 15-year career as an Alaska Airlines pilot to spend more time at home.

“I never in a million years saw myself as an entrepreneur,” he notes on his website at www.trazzaflf.com. “I remember late one night, on the way home from the airport after I finished a four-day trip, I stopped at a traffic light near a local grocery store which also featured a well-known coffee shop inside. This sparked an idea in me; an idea of producing and serving authentic Lebanese food in local retail stores, just as this coffee shop was doing in this grocery store.”

And who better to serve authentic Lebanese food than Claude, whose brother, Tony, and sister-in-law, Emeline, operated Karam Restaurant, serving some of the family recipes in Portland for 25 years. Now, they have returned with Karam Lebanese Deli and Catering, located at 2800 SW Cedar Hills Blvd. in Beaverton. His other brother, Andre, is running Zaatar Fine Lebanese Cuisine restaurant in Portland’s Pearl District.

Like many first-time entrepreneurs, Karam started experimenting with recipes from his home kitchen in Beaverton six years ago. He quickly expanded his business to a commercial kitchen in Northwest Portland at KitchenCru, which he refers to as his ‘culinary school’. It was here where he learned everything from food preparation, cooking, and kitchen equipment to exposure to great local chefs. Karam began presenting the food he made at KitchenCru and he was invited to participate in a “Food & Wine Event” that same year at Bales Marketplace Cedar Mill; the business’ first retail partner in 2012.

Today, you can find Trazza’s Fine Lebanese Food products at more than 100 stores throughout the Portland metropolitan and Vancouver, WA area, including Fred Meyer, Chuck’s Produce, New Seasons Market, Zupan’s Markets, Natural Grocers Vitamin Cottage, Whole Foods Market, and hospitals such as OHSU and Kaiser Sunnyside and Tanasbourne. He has distribution as far south as Salem and through a New Seasons Market partnership Trazza products are being sold in the Seattle area.

Karam said his products are made from scratch and in small batches. All Trazza products are made without the use of pasteurization and there are no artificial ingredients or preservatives. He said they are delivered to the stores in less than 24 hours from being made and packaged. The 8-oz. hummus products retail for $3.99 and they have a shelf-life of 10 to 14 days.

The name Trazza was inspired by an Arabic word Tazza, which Karam said the meaning is “fresh.” Tra is significant for the meaning “traditional.”

Tradition – fresh – family – local; these are all very important attributes at the small and growing business with 18 employees.

“We are revolutionizing the food industry,” Karam noted with a clear commitment to his new-found passion – from flying to food!