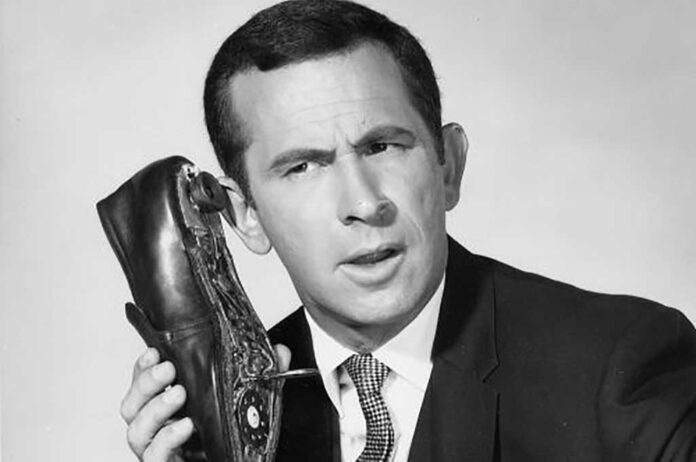 I have learned additional interesting details regarding stories in two previous Veterans Corner columns.  One is the military background of Don Adams from the TV Series “Get Smart” that ran in the column covering four months of “fame” for the Aircraft Carrier USS Yorktown.  The other involves the coral rock marking the spot where 98 U.S. contractors were executed on Wake Island during WWII.

Don Adams joined the Marines in WWII at the age of 16, by lying about his age. He already dropped out of school and was working as a theatre usher. He participated in the Battle of Guadalcanal in the Pacific where he was shot and contracted Blackwater Fever, a serious form of malaria known for a 90% fatality rate. He was evacuated and then hospitalized for more than a year at the Naval Hospital in Wellington, New Zealand.  After recovering, he returned stateside where he finished out the war as a drill instructor.

Following his discharge, he held a series of jobs.  One, he said, was obtained by falsifying college credentials and an engineering background to be hired as an engineer designing underground sewers. His lack of training was not discovered for six months. He was born in New York to a father of Hungarian Jewish decent with the last name of Yarmy and mother of German and Irish Catholic ancestry.  He used Adams as his stage name because casting calls were done in alphabetical order.  He was raised as a Catholic and his brother as a Jew.

He enjoyed talking to Yorktown sailors during breaks, walking around the ship in his Navy Lieutenant khaki uniform The crew had been briefed prior to shooting so everyone knew who he was, whether or not a Get Smart fan. He would walk up to a group of sailors and say in his characteristic short burst of speech “Knock off for the Day” or “Isn’t this Navy stuff all bureaucratic baloney”.   Everyone laughed, his humor was appreciated.

I was asked about the significance of the numbers 5-10 on the coral rock pictured in my Wake Island column, which marks the area where 98 American contractors were executed on Wake Island. The numbers are the date of execution. In both international and military dating systems., the number 5 is the fifth day of the month and the number 10 is the tenth month (October) of the year.  Chiseled in the rock is “98 U.S.P.W. 5-10-43”; meaning  “98 U.S. Prisoners of War, October 5, 1943”.  A plague later mounted on the rock reads “The 98 rock inscribed by unknown POW” Historians say the date is two days off. According to Japanese records, the actual date was October 7, 1943.

These contractors had been retained by the Japanese to repair the Wake airfield damaged by fighting when the Japanese captured Wake Island.   They had suffered two years of mistreatment as forced labor before marched blindfolded, with their arms bound behind them, into a trench on the beach where they were machine gunned.

The Japanese Base Commander, Admiral Sakaibara, had them executed after two days of blistering attacks from fighters off the USS Yorktown. Expecting a follow-up landing attempt, he issued the order, concerned that the contractors would rise up as a fifth column during the landing attack to help overcome their captors.  They were part of the 1,150 contractors who been hired by Morrison-Knudsen Company, many from the Northwest, to build an airfield, seaplane base and submarine base and also to dredge a channel for U.S. submarine access. After marking the rock, the sole survivor was captured and beheaded the next day. Other contractors who survived the Japanese attacks were sent as POWs to China and Japan.

Marianne Potts Honored for Serving 27 Years on CPAH Board

B-17 co-pilot Bradley Summers’ Memoirs provide details about his 22 month...