A little over 10 years ago, on June 23, 2009, my husband and I received a phone call that would change our lives forever. The call came from Marine Corps Base Quantico, and the voice on the other end stoically told us our son, Matthew had been injured by an improvised explosive device (IED) in Afghanistan which resulted in bilateral amputation of his legs. Of course, this was horrific news but at least Matthew was still alive. He had been airlifted to Bagram Airfield, then onto the military medical center in Landstuhl, Germany for surgery and evaluation. A few days later, when he was stable enough, he was flown to Bethesda Naval Hospital. My husband Dale, our daughter Carolyn, and I were flown to Germany and then to Maryland to be with Matt, and over the next several days we continued to learn about the severity of his injuries. After multiple surgeries and medical procedures, the medical staff was unable to keep ahead of the aggressive infection caused by the initial blast. Our strong, athletic, good-humored son, who had a bright smile, a magnetic personality, and had wanted to do something big with his life, had died 18 days after stepping on the IED. He was 22 years old and just a few months shy of completing his commitment to the Marine Corps.

Matt had signed up to become a Marine in November of 2004, just after his 18th birthday and seven months prior to his graduation from Tualatin High School. He had talked about joining the military since middle school, and by his Junior year he seemed serious about it. Try as we might, there was no talking him out of it. Once his decision was made, he was “all in” and Dale, Carolyn and I knew we needed to be supportive. He served two tours in Iraq and extended his service for a few months for the deployment to Afghanistan. Matt was planning to come back to Oregon and go to college with the possibility of studying something in law enforcement.

It seemed fitting to create a scholarship in Matt’s memory. As it happened, there were plans in the works that same year to add a 5k race to the West Coast Giant Pumpkin Regatta festivities held annually in Tualatin each October. Our family was contacted by a small group of people who were organizing the 5k and they wanted to make it a fundraiser for the scholarship, so the Regatta Run was born. The first Regatta Run was held just three months after Matt died. My family and I were not involved in planning the first Regatta Run; we were still dazed and confused from the grief of losing Matt. We simply showed up and participated along with about 80 other people to run or walk the 5k through Tualatin Community Park, over the footbridge that crosses the Tualatin River, into Cook Park, and back. 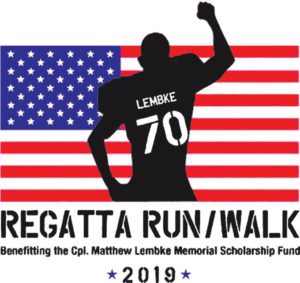 The original organizers of the run include Kathy Hollamon, a health and physical education teacher at Tualatin High School, Linda Moholt from the Tualatin Chamber of Commerce, Debbie Dehler, a local personal trainer, and Celia Perkins, a fit expert with Road Runner Sports.

Kathy has emerged as the primary coordinator and advocate of this event. She continually strives to make the run better each year by gathering new sponsors, promoting the run, rallying volunteers, and encouraging Tualatin High School Seniors to apply for the scholarship. She spends countless hours working on every detail from designing the posters and t-shirts, creating ads, writing articles, contacting and following up with sponsors, filing permits, managing registration for the run and overseeing the scholarship application process. She also coordinates with the Timberwolf Support Organization (TSO) which manages the budget for the run and the scholarship.

Linda was an integral collaborator in planning the run for several years, and although she has had to step down to focus on her duties at the Chamber of Commerce, she continues to support the run by encouraging chamber members to sponsor and participate in the run. Early on, Linda guided the management of this event with her expertise in event planning and navigating the specifics of the sponsorships. Debbie is our course expert. She plots the trail and measures the distance to confirm the proper length. She helps organize volunteers to guide participants and follows up on the route as the last walkers cross the finish line. Celia also has extensive experience in planning and participating in running events and has been our race day expert. She has been our contact at Road Runner Sports which is where we set up our race packet pick up the day before the race.

The Regatta Run and the scholarship have become a healing catalyst for my family and me. It has given us something positive to focus on rather than letting our loss devour us.  For us, it’s mostly about honoring Matthew, his service and his sacrifice. We hope that in keeping Matt’s story out there that people will remember all veterans, their selfless acts of service and the sacrifices their families make. It is heartwarming for us to see so many people come join in the fun on race day. Matt’s friends from school, his Marine Corps buddies, our friends, family, and coworkers all show up, along with many people who have never met Matt but want to share in this experience. Last year we had our best turn out yet with over 600 runners, joggers, walkers, and strollers. Over the past 10 years we have awarded $188,500.00 in scholarships to 74 Tualatin High School graduating Seniors.  I cannot express in words the gratitude we feel for the way our community has embraced us and has helped make the Regatta Run and the scholarship such a success.

This event would not be possible without our sponsors and community support. We started with just a handful of sponsors the first year and many sponsors come back year after year with their financial contributions and enthusiastic participation. Due to the generosity of our sponsors, we can use every dollar collected from the race registration for the scholarship fund.

The race begins at Tualatin Community Park at 9:00 am on Saturday, October 19.  Please go to www.regattarun.com for registration information and to see a full list of our sponsors.

Tualatin gets its title!

Improve your Gardening Skills while Contributing to Community