Iris Harrison is used to strangers recognizing her by her voice.

“I was in T.J. Maxx the other day, talking to myself out loud,” she says, “and some guy turns around and goes, ‘Iris?’ and I said, ‘yes,’ and we had this entire conversation.”

The reason for such recognition: Harrison, a longtime Tualatin resident, spent more than four decades as a DJ for Portland classic rock station KGON. She signed off for the last time on December 18.

“It still feels like a long vacation,” she says of retirement so far. “It feels like I should be going back any time.”

Asked whether she misses her mid-day time slot at KGON, Harrison, says, “yes and no.” She’s still doing some endorsements, so she’ll still get to go to the station and see her former colleagues from time to time.

“But all the other responsibilities and worries, I can just dismiss that,” the 65-year-old says. “The stress level has gone way down.”

‘I Found What I Want to Do’
Harrison grew up in Monterey, Calif. Her parents retired to Eugene and suggested the then-20-year-old follow them and attend the University of Oregon. That was in 1974.

“I was not convinced, but then I came up and I loved it,” she recalls. “There was something going on – Tom McCall was governor, and you could just feel this thing going on. It was idyllic. It couldn’t have been any better – I found my tribe.”

And it was at U of O that Harrison, a drama major, found her calling.

“I kept thinking, ‘what am I going to do with this?’” she says. “I really didn’t have the drive to make it in Hollywood. I just didn’t see that happening. I was looking, but I didn’t know I was looking.”

With a drama major and an English minor, Harrison thought she might go on to teach, maybe run a high school drama department.

Then, she took a TV-radio workshop.

For Harrison, radio was the perfect mix of performance (“It was really great because you didn’t have to get into makeup”)  and technical theater.

“I loved running sound and lights, and all that other stuff. It was kind of the best of both worlds,” she says. “I got to operate the board. I got to put sound together. And I got to be an actress.  And the music was amazing – I mean think about 1974, the music.”

Harrison’s personal music taste is eclectic, but it‘s built on the foundation of what she calls the “basic food groups of classic rock.”

“I was a Beatles fan when I saw them on the Ed Sullivan show in the fourth grade, so I kind of have to go back there,” she says. “And the Stones were the bad boys, so they were the ones mom didn’t really want you listening to in the house. And Zeppelin – the electricity they brought to it all.”

Bob Dylan, Tommy Bolin, Little Feat and many, many others are also in the mix. 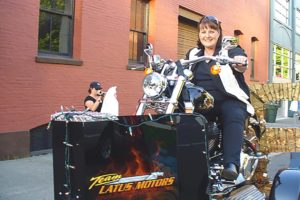 ‘Kind of a Big Month in My Life’
In 1975, Harrison started her first paying radio job at KFMY, “a little free-form daytime station in Eugene,” according to her KGON bio.

The first time she was on air was “slightly terrifying, but I made it through,” Harrison says. “I think it’s mostly because I had theater as a background, and so being on stage in front of a bunch of people saying lines and hoping the scenery doesn’t fall down was something I had dealt with.”

The following year, Harrison was hired by KVAN in Portland. In March of 1977, she started working at KGON after a friend told her about a part-time opportunity there where she could earn as much money as she was at KVAN.

“She was right,” Harrison recalls. “I got all my tapes together and brought them over and got hired at KGON.”

In October of ‘77, she began working full-time, doing mornings, at KGON. That same month she married fellow DJ Marty Party, a good friend from her Eugene days who she had kept in touch with on visits south to see her parents and friends.

“It was kind of a big month in my life,” she says.

Marty Party retired from KGON in 2012 after more than 30 years at the station. That same year, Harrison was inducted into the Oregon Music Hall of Fame, which noted that, “To many, Iris is KGON” and described her as “a great champion for Oregon-based artists.”

Harrison said the recognition was “quite an honor for me.”

Asked whether she faced any challenges as a woman in the radio business, Harrison says, “I never thought about it. I’ve been asked that many times, and I realize, looking back, that I was kind of a pioneer in a way. But in Eugene at that time, at another station, they had two women on in the morning, which I thought was revolutionary.”

‘I’m Such a Fan’
Over the course of her 44-year radio career, Harrison had the opportunity to meet and interview “so many” notable people.

She says she found herself starstruck “almost constantly. That’s the thing – I’m such a fan that I’m surprised I ever pulled off an interview.”

Among her favorite interviews were the unexpected ones, such as writer Maya Angelou: “That was really cool,” she says.

And, of course, there were interactions with a multitude of musicians – too many to easily recall.

George Thorogood, of “Bad to the Bone” fame, who Harrison interviewed more than once, comes to mind: “He can talk and talk and talk, and he’s hilarious, if he’s in a good mood. He always seemed to be in a really good mood for me.”

Another repeat interviewee was Chrissie Hynde of the Pretenders.

“I love their music so much, and she’s a woman – a strong woman, very opinionated – and I had been warned that she is difficult,” Harrison recalls.

In one interview, Harrison pressed Hynde on why she participated in the Lilith Fair after previously badmouthing the music festival that was founded by Sarah McLachlan in the 1990s.

“I thought, OK, this may piss her off, but I had to ask her,” Harrison says. “I said, ‘the last time I saw you, you were bashing Lilith Fair on stage, and then I see you going on tour with them – what happened?’”

Hynde’s reply: “Sarah. She can talk me into anything.”

“It was really delightful,” Harrison says. “I went from being very scared of the whole idea of talking to her – thinking, oh, my gosh, I don’t want to hate this woman, I really want to love her – and it went well.”

‘You Are the Voice of Portland’s Rock ‘n’ Roll’
So, why retire now?

“The times they are a-changin’, to quote Dylan” Harrison says, “Classic rock has been pivoting. I could have kept doing it until I was 70 – but why? I don’t see any reason to.”

When she announced her retirement plans on the KGON Facebook page, fans flooded the comment section with praise for Harrison’s career and stories about the impact she had on their lives.

“You are truly an icon that has touched my life in more ways than you will ever know,” wrote one listener.

“I love you, Iris!” wrote another. “You are the voice of Portland’s rock ‘n’ roll. Thank you for sharing your life and love of music. You will be missed.”

Of such tributes from fans, Harrison says, “I’ve been incredibly blessed that people have been so lovely. It was such a gift to have them tell me. I don’t remember every show, but they did. For some reason, at that point in time, it meant something to them.”

‘A Way to Keep My Toes in It’
Harrison is still settling into retirement. An avid gardener, she’s waiting for the weather to improve so she can begin pruning the bushes and shrubs around the ranch-style house in Tualatin that she, Marty and their then-second grade son moved into in 1992.

“When we first moved in, there was a lot of farmland; we used to go feed the horses. Now it’s suburbia” she says, talking about how much the city has changed over the past 28 years. “We have loved it; we haven’t wanted to leave. We’ve set up this house to stay.”

She plans to spend more time with her “girl gang” of three granddaughters – ages 8, 3 and 5 months – who live nearby in Wilsonville.

Further out, there are plans for an extended road trip with her husband.

“I would love to take a year and just do that, go all over,” she says.

And, though she has retired from terrestrial radio, Harrison is working on a concept for a potential podcast that would feature some of the hundreds of interviews she has done over the decades.

“That would be a way to keep my toes in it,” she says. “I think it would be fun to go through and tell the story of why the interview happened, and then play the interview.”

As for being recognized by fans in public, Harrison muses that it will end someday.

“I wonder when this is going to go away,” she recalls thinking after the aforementioned T.J. Maxx incident. “There will be a certain point when people don’t remember any more.” 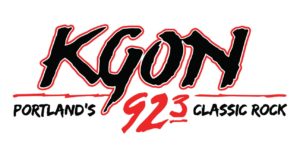