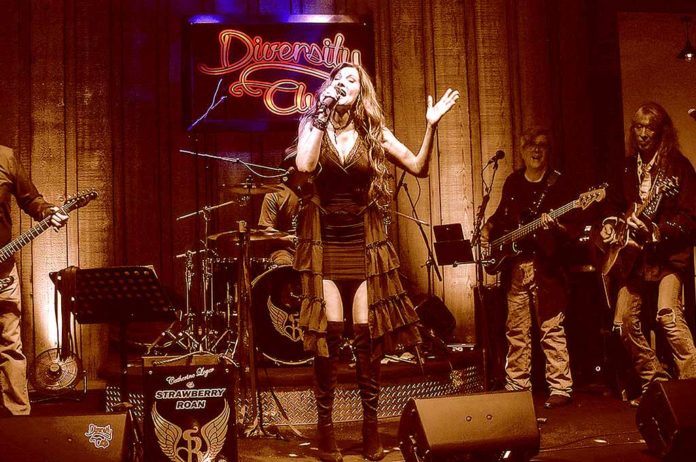 Catherine Loyer, a singer with several band affiliations until she made the decision to start her own new project, Strawberry Roan and has been the singer now for twenty years. They play an eclectic mix of country rock, blues, pop, covers, artistic covers, and their own original music which leans toward country and rock music. They are a crowd pleaser and play everyone’s favorite songs. Music is about the connection with the audience and she truly loves that connection. Loyer says: “I do truly love the chance to connect with people through music. In an evening, I watch the crowd and take them through different songs and genres, to where I think they want to go. It is a beautiful, symbiotic relationship.” Loyer truly loves the chance to connect with people through music and of course, the fans love to interact with her as she goes out into the audience singing, creating excitement and making new fans.

Loyer knew since she was four years old that she wanted to be a singer. Her earliest memory (at play) was performing in the doorway of the kitchen pantry when her mother was preparing breakfast (before sunrise). “I remember the curtained doorway and imagined it was stage curtains. I could hear the roar of the crowd and the applause.

I’ve always known I wanted to sing.” Loyer started out singing in a choir at elementary school. She learned to play the piano and guitar but really only for writing purposes. “I use these instruments for writing, but wouldn’t call myself a player. I prefer to front the band as a singer and performer.” Her first band formed in high school, and soon after that, she was approached by a professional band and the rest is history!

She spent most of her formative years as a Navy Brat, which meant moving to many different places while growing up. They traveled all over Massachusetts, California, Utah, Japan, and Oregon. After her father left the Navy and became a businessman, they still traveled but had firmly placed down family roots in Oregon. “All in all, it’s a wonderful balance between the stability of honest country upbringing and the life experiences that travels bring you.” Several months during the year, she lived on 2,800 acres on a horse and cattle ranch in Southern Oregon. Roan says: “I was brought up around horses and I was aware of the term, ‘Strawberry Roan.’” She explains that it is a term referring to a specific color of a horse. “It’s a name that connected my upbringing and life to my music. Most people do not know that I am really a Norman Rockwell type, boots wearing, crooked ponytail, tomboy horse girl.” Well if that was a bestkept secret it is out of the bag now!

This band has an impressive roster of talented musicians that can play anything, from older to more modern music. They cover great familiar songs by Elvis Presley, Joe Cocker, Little Big Town, Miranda Lambert, Alanna Miles, Bonnie Raitt, and Jonny Lang. This band brings their own special talent and art to the table making the distinctive sound that is Strawberry Roan. Loyer says: “my band, they’re so amazing, I’m so blessed and fortunate to have them in my band. Gabriel Trees is a proficient lead player that is unafraid to think outside the box, making the guitar solos memorable and talked about. Scott Bickford carries the bass position. He brings both amazing tenor vocals as wells as many years of solid bass playing wisdom to the table. Dennis Elmer is on drums and he has been a fixture in the Portland music scene with many reputable bands for many years. He’s a perfect fit because he knows how to carry the groove and adds tasty fills at the right moment. Jim Loyer (my husband) is on acoustic guitar and he’s solid, the rock in the band. He will always be where and when I need him on guitar. He truly is an invaluable player. I have Willow Heavritt, my beautiful and talented daughter, on lead and she backs up vocals. She has been singing on and off with me since she was four years old. Now she is a full-fledged member of Strawberry Roan.” It’s obvious that Strawberry Roan has a unique and special family harmony together that isn’t so easily achieved. “My support system all these years has to be Jim Loyer, my husband, my father Al Kinney and my best friend Tammy Mischke. I want to thank them all for that and especially my band for playing so well. We appreciate all our fans for their continued support.” The journey took her many places but isn’t that what life is all about? There are many more places to go in the future!

If you are looking for a great band for your event that can cover everyone’s favorite songs from most genres of music and that fits in with various venues and circuits such as McMenamins, A-list clubs, festivals like Rose Festival, Vancouver Washington fireworks show etc., as well as corporate events, weddings and other venues. To learn more about Strawberry Roan, visit their website: www.catherineloyer.com. While you are there, listen to their original tunes, and there is even talk about a new CD in the works.

Strawberry Roan will be at the C & I Bar & Grill in Tualatin, Oregon on February 15, 2019, and the music will begin about 8 PM. Get there early, grab a table, grab a drink and order dinner. The food is great, not expensive and they give you fairly large portions. And, there is no cover. There are always people dancing, with plenty of tables that have a good view of the stage. This great music venue offers plenty of choices on the menu, (even late nights) and they serve breakfast all day. Can’t beat that for an amazing night out! And it isn’t even far to drive! Visit their website: www.cibarandgrill.com for complete band listings and more!

Mix It Up at the Blender Dash!

Washington County Gyms Reopen to a Sigh of Relief