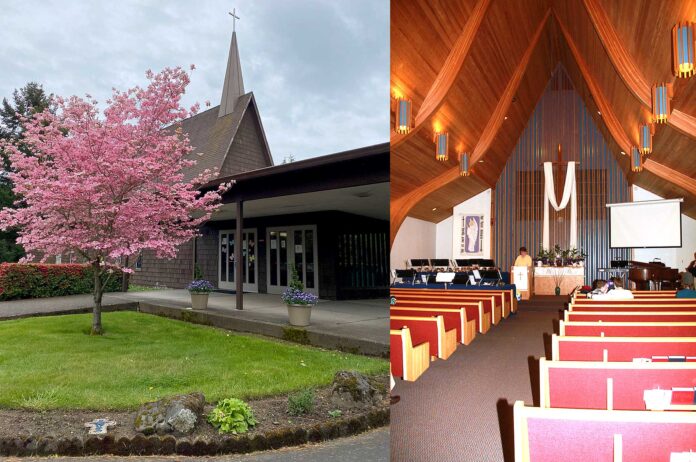 After losing its earlier building by fire, and outgrowing the second, Tualatin Methodists are now marking 40 years in its third location on the city’s highest hill.

The church’s initial formation was in 1909, and for most families in the rural area, it was the only place to turn for Christian worship, spiritual development, marriages, baptisms, funerals, and family celebrations. Names found on many streets today were active members and played key roles in civic life. Several of those families are still involved today. In 1960 members of the church had the foresight to buy 4 acres at 20200 SW Martinazzi, knowing the city would be growing in the future.

On Sunday, August 1, 1982, the congregation began worship that morning in its 1926 “downtown” church on Boones Ferry (next to today’s Grab a Gyros restaurant). Carrying hymnals, banners, altar cross, artwork and with choir member robes blowing in the breeze, families hiked up the hill to finish the service in their new sanctuary. Said Loyce Martinazzi, “I remember that walk very well. I carried my grandson Laurance on my shoulders, crying because I did not want to leave my old church. However, I soon learned that the church is not the building, but the people.” Her grandfather once farmed that same acreage.

A variety of new ministries soon flourished. Yet some traditional outreach also continued, like creating floats for the Crawfish Festival and selling hot dogs at the church booth, which helped fund the new church kitchen. Happy Hilltop Preschool served some 40 children annually for almost 20 years. As the 2000s got underway, the church helped launch the Tualatin School House Pantry in 2004, which has now expanded to serve as many as 700 families monthly. For several summers, the church ran a free six-week day camp for children in nearby apartment complexes.

Nine different pastors have served the church over the past 40 years, the most recent being the Rev. Amy Overton-Harris, who says, “we will continue walking together into the next 40 years welcoming all races, all religions, all countries of origin, all LGBTQ+, all abilities, and all ages.” In the Methodist system, pastors are assigned where they are needed.

Since the move, Tualatin United Methodists have continued to make their marks on the entire community, harkening back to the days when members were primarily local farmers with names like Martinazzi, Nyberg and Koch. New families followed and took on roles as City councilors, on city advisory committees, leadership for service organizations, and in fraternal groups and continue that involvement today.

Members and friends are invited to attend anniversary activities starting at 10 a.m. Sunday, July 31, for worship, displays of the 40-year story followed by a traditional potluck.   For details, leave word at the church office:  503-692-1820 or visit the church website.

Now some 15 churches call the Tualatin area their home. The 1926 craftsman building the Methodists left behind was purchased by Clark Lumber Company, whose property was adjacent. It next hosted a succession of renters until the Tualatin Historical Society took possession and, in partnership with the City of Tualatin, it was moved near the police station to become Tualatin Heritage Center in 2006.

The Center offers rental space and once again hosts a church on Sunday mornings.

The Hilltop Community Garden relies on volunteer gardeners who enjoy planting, tending, and harvesting vegetables and herbs. During the growing season, deliveries are made three mornings weekly to Tualatin School House Pantry located at Rolling Hills Church on Borland Road. Please bring your favorite tools, or we can provide them. The gardens are at the south end of the church campus. For ways to help, email tkroen@yahoo.com or migletvk@gmail.com.

The Fight Against Teen Vaping in Tualatin