Some predicted it an impossible game for the Timberwolves. How could they face #2 in the state who’ve only been beaten by Tigard themselves? Surely the wolves couldn’t come out on top… but they did, and by quite a margin.

Even if big plays seemed out of the question in the matchup, Tualatin would pull out all the stops against LOHS.

Beginning in the first quarter with Tualatin starting in possession, they slowly carried through four first downs with Kainoa Sayre (#21) taking the first points of the game. Tualatin managed a lead against Lake Oswego; the game seemed possible after all. 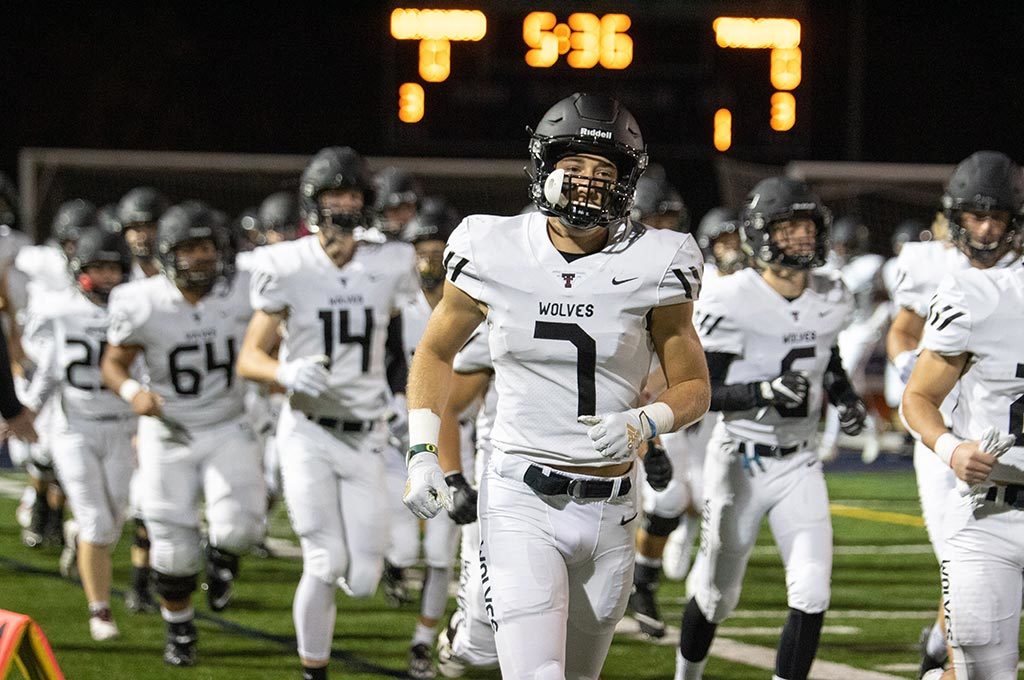 However, Lake Oswego quickly responded with a TD of their own and a 2-point conversion to give them a lead by 1. Maybe the Lakers would stay victorious? After all, with the concession lines a mile long and a packed stadium, the Lakers were keeping their team hyped up to fight off their opponent.

But breaking into the second quarter, Malik Ross (#23) took away any chance for LOHS. Running a mere 19 yards through a mob of Lake Oswego tackles, he gave Tualatin their second score of the game.

LO didn’t let go of the fight however, one of the Lakers’ receivers ran 45 yards, 40 yards short of the endzone. Shortly following, the Lake Oswego quarterback threw a short pass to a nearby teammate. The athlete should’ve checked in front of them though as out of the blue, he got absolutely trucked by Tualatin’s Luke Marion (#7). “I’ve never seen someone get hit so hard,” a sidelined Tualatin athlete said.

From there, the game was seemingly all over. Lake Oswego wouldn’t score past their initial touchdown in the first quarter, and Tualatin kept up their game. Sayre scored twice more, including one with a 40-yard run. The final points of the game were at 7 minutes, 10 seconds to go where Sayre threw 31 yards to Marion to seal the deal at 34 – 8.

The fans and coaches were more than ecstatic with coaches aggressively hugging each other and the students closing the game out with their post-game huddle and cheer.

“We did it as a team. Everybody did their job, and everybody had a good weekend practice,” Head Coach Dan Lever said. “Let’s enjoy this one.”

After a quick relaxation at the pool for the Timberwolves Football Team, all they have left is to prepare for the final match of the regular season. The ultimate rivalry game: 7 – 1 Tualatin at undefeated Tigard on Nov. 1, 7 p.m. sharp.

How Does Your Garden Grow?

Although largest Navy base in the world during WWII, Ulithi Atoll...

Murder and Intrigue in Old Tualatin