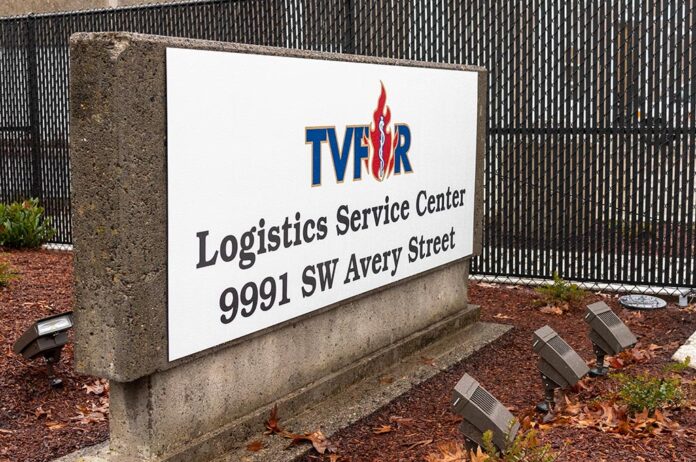 Tualatin Valley Fire & Rescue’s Logistics Division announced it has moved into a new Logistics Service Center at 9991 SW Avery St. in Tualatin. The fire district’s supply warehouse, fleet maintenance, communications, facilities maintenance and administrative support staff will now be housed in a renovated 40,000-square-foot warehouse that has been undergoing renovation over the past year.

The district’s Logistics Division was previously housed at its North Operating Center in Aloha, which was built in 1979 to serve five surrounding fire stations. Since then, however, the district has seen significant expansion and has added no fewer than 22 fire stations. This ultimately meant the old facility was not able to serve all of those stations.

Improvements to the Avery Street building include seismic upgrades and an extensive interior renovation to smoothly separate the different functions housed there.

The move was completed during the first half of December.

Merryman Barnes Architecture designed the renovations, while Emerick Construction Company served as the general contractor for the project.

The Tualatin City Council recently approved changes in the city development code that could allow more cannabis businesses to operate in commercial and industrial areas of the city. Now, councilors have approved an agreement with the State of Oregon that would allow the City to collect a three percent tax on the retail sale of cannabis products.

“If we were to get a dispensary in town, the best way to collect that tax would be to go into an intergovernmental agreement with the state department of revenue,” said Don Hudson, the City’s Finance Director. “When they collect the statewide tax (on cannabis) they collect the local tax, as well.”

If the City were to forego the agreement with the State, Hudson added, it would need to collect any cannabis taxes on its own, with the associated costs involved.

The ordinance was approved unanimously.

Are We In Another Housing Bubble?