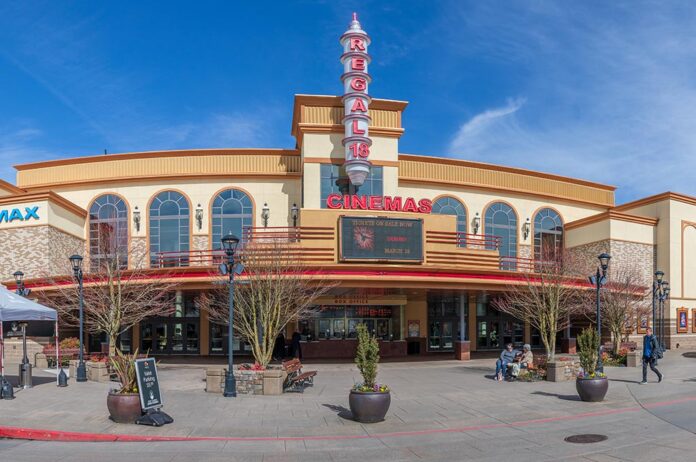 The COVID-19 pandemic looks poised to potentially claim another giant of the entertainment industry, and this time around, the impact could be felt by Tigard and Tualatin moviegoers.

The Bridgeport Village Regal Cinemas is possibly facing eviction over nonpayment of rent, caused in part by the business restrictions enacted by Oregon as the state seeks to limit the spread of COVID-19, but also by the financial problems of its British-owned parent company, Cineworld. The action by Bridgeport Village owner, CenterCal Properties, caused shock in the Portland area and left local government officials and residents scratching their heads.

For CenterCal, however, the matter was fairly straightforward. The movie chain’s failure to communicate with them about their financial issues left CenterCal little choice but to seek recourse in court.

CenterCal CEO Fred Bruning told Tualatin Life in December that Regal has not paid its rent at Bridgeport Village for the preceding nine months and now owes CenterCal over $1 million in missed payments. Significantly, Bruning also said Regal has not communicated with CenterCal about their decision to stop paying rent, despite offers by CenterCal to make concessions on rent payments, help with marketing or employ other strategies intended to ease business losses. He added that CenterCal has done all of these things for other tenants it works with.

“Since the pandemic started, we’ve made rent concession deals with 90 percent of the tenants in our portfolio, deferred rent, help with marketing, depending on the situation,” Bruning said. “We’re operating in five states, so there are a lot of different circumstances.”

CenterCal is based in El Segundo, Calif., and operates commercial properties in Oregon, Washington, Idaho, California and Utah. It is a mainstay of the south Portland metro area, and all of its Oregon properties are located in Tualatin. In addition to Bridgeport Village, the company operates Nyberg Woods, which is anchored by Best Buy, and Nyberg Rivers, which is highlighted by the Cabela’s outdoors store.

At Bridgeport Village, Regal Cinemas has been one of the mall’s anchor tenants since opening in 2005. But the COVID-19 pandemic has hammered the leisure and hospitality industry, and companies like Regal have struggled to remain afloat without their normal stream of moviegoers. The Regal chain, which was purchased by Cineworld in 2018, issued a notice of temporary closure for all 536 of its theaters in the United States on Oct. 9, 2020.

“As we have done to date, we will do everything we can to save livelihoods and the company – this is an extremely delicate and tricky balance,” the company stated in a press release. “We continue to work with the National Association of Theatre Owners to ensure we are lobbying state and local governments to support our employees and the industry which has so much cultural significance.”

This was followed in November by an announcement that Cineworld had secured a $450 million line of credit that allowed it to avoid filing for bankruptcy protection. But Regal Cinemas’ woes go back further than October, at least where Bridgeport Village is concerned.

Although CenterCal issued a notice of default to Regal on Oct. 14, 2020, Bruning said his firm tried to communicate with Regal without success for months before taking action.

“We never wanted to evict to Regal. We just wanted to communicate with Regal,” he said. “They weren’t really communicating with us since the pandemic started.”

Bruning added that when he finally managed to contact the company’s real estate director, Regal and Cineworld wanted to retroactively amend their lease at Bridgeport Village.

“Their position is they are somehow exempt and can change the lease,” he said. “But that doesn’t describe the state of the law in Oregon or the US, or even in England. Follow that logic and you’d bankrupt every shopping center in the country.”

Regal responded to the notice of default by filing a lawsuit in Washington County Circuit Court on Oct. 26, 2020 seeking to block the eviction. The lawsuit is based on the theater chain’s contract with CenterCal that allows non-payment of rent for reasons that are “beyond reasonable control” of either party, including actions of government. Regal argues that the COVID-19-related restrictions on business operations in Oregon qualify.

A Washington County judge subsequently issued a temporary restraining order against CenterCal, delaying the eviction. Regal has also petitioned to move the case from state to federal court, which is where the legal process currently stands.

“If they are struggling, they could request assistance, too, not just throw businesses out that can’t temporarily pay their rent,” Snider said at a Dec. 8, 2020 meeting of the Tigard City Council. “Not only do we not like this because it’s not within the spirit of what our two cities have said, but it also is super confusing and doesn’t make any sense to our community. What’s the end game here?”

But once it was made clear there was more to the situation, that tune quickly changed. Bruning met with Bubenik and Tualatin City Manager Sherilyn Lombos following the Tualatin City Council’s Dec. 14, 2020 meeting and told them earlier media reports were inaccurate.

“Within a day I had a call from Fred and we went ‘Okay, lesson learned, maybe reach out next time and get the clear picture,’” Bubenik said. “I think the community would love to hear what CenterCal is doing to make tenants whole and not kick people out.”

Now, it’s just a matter of the letting the legal process take its course.

“They’ll figure it out in court,” Bubenik said. “People want a movie theater back, ideally, but I don’t know how long COVID will last and if movie chains will survive. So, I can see why if you were owed a million dollars in rent, you would want some certainty you’d get it. We responded by taking care of our community; a couple of phone chats and it’s a lot more clear now.”

STEM Education: Fun for Kids and Good for Tualatin