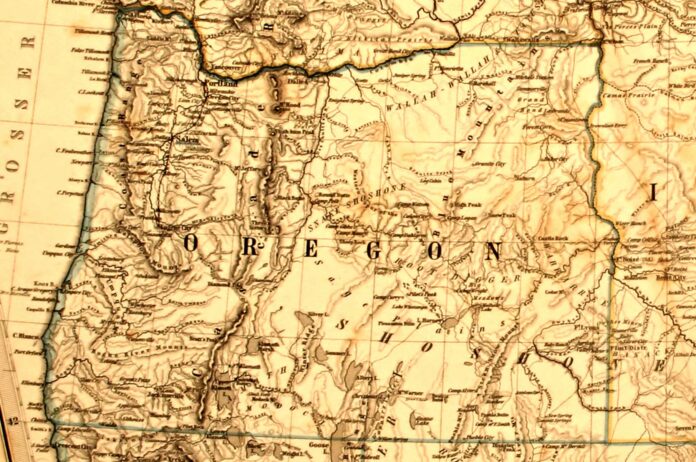 The origin of the name Oregon may lie all the way across the continent, according to Thomas Love, the retired professor who traced the etymology back centuries to the Eastern seaboard.

Love’s theory, published in a 2004 issue of Oregon Historical Quarterly, tracks references to the name back and forth across the continent through maps and writings inked over two centuries, pinpointing its origin to the Algonquian word for “beautiful river.”

“Wuarigan” or “Olighan” were words used by the Mohegan tribe in Connecticut for “beautiful river.”

“It’s a pretty cool story. It ties together the whole history of the country from New England to the fur trade to Lewis and Clack,” Love said.

He stopped by the Tualatin Historical Society to share it before moving to Arizona after finishing a decades-long teaching career at Linfield University.

“This is not a linear argument by any means,” he said in the lecture, adding, “There are about 500 rabbit holes we could go down.”

The theory traces Oregon’s first use to a 1765 funding request from Major Robert Rogers to the Kingdom of Great Britain, petitioning for money to explore North America from the Mississippi River west to “the river called by Indians Oregon, which flows into a bay that projects northeastwardly into the country from the Pacific Ocean.”

But, Love said, there is no word that sounds like “Oregon” in the languages spoken by indigenous people in the West. The exact location of the river – though historians believe it to be the Columbia – remains unknown, and it wasn’t actually called the “Oregon River” by any peoples in the region.

The river in question was described as a “beautiful river” with no name by an Indian who said it could be found on the other side of the mountains, believed to be either the Rocky or Bitterroot Mountains in Montana.

Rogers was inspired by an earlier 1758 writing, Histoire de la Louisiane,  in which the “Belle Riviera” or beautiful river was noted.

“I think we’ve got a pretty good argument for its origin in New England Indian languages,” he said.

Rogers, Love believes, lifted the word “Wauregon” or “Olighan,” the Algonquian-language name for the Ohio River, and pinned it to the nameless body of water he was searching for because Wuaregon, like Ohio, translates to “beautiful river.” Roger’s, who was from Connecticut and had previously allied with the Mohegan people, understood Algonquian.

Ohio, he explained, is a Seneca word. The Ohio River had multiple names, “but the Seneca name is what stuck, for what reasons I don’t know, but Olighan didn’t.”

Love worked with Smithsonian linguist Ives Goddard to trace the name back from its first appearance in print, Jonathan Carver’s Travels Through the Interior of North America, in 1778.

It was thought to have originated with Carver for about 150 years, until about 1920, Love said, because Carver’s book talked about the Oregon River without citing a specific location or defining the name’s meaning.

Travels Through the Interior circulated widely, according to Love, and Lewis and Clark carried it in their exploration, but he says the Carver guess didn’t follow the usage back far enough to reach Rogers.

It was Rogers who commissioned Carver to search for the Oregon River, and Rogers who made the jump from “beautiful river” to “Oregon.”

“There’s no smoking gun,” he said. “It’s all surmised from a wealth of complex, convoluted information, right? I think we’re on solid ground. It’s just degrees of plausibility.

Oregon remains one of the only states whose name is not clearly understood.