The Galbreath farm wagon owned and restored by Tualatin Historical Society made another journey in August, this time back to Lee Farms where it was stored for many years before donation to the Society.  It is now on display there where thousands of visitors will learn more about our city’s rich agricultural past.  Marking the 7th generation, Lee descendants are now celebrating 150 years of farming in Tualatin that began with the Jurgens family in 1869.  Today’s farm on 65th Avenue (formerly Meridian Road) features seasonal events and a market selling local products. 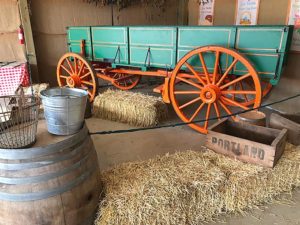 George Galbreath crossed the plains on the Oregon Trail when he was two years old with his parents Sarah and Sam and little brother Joseph.  The Galbreaths took out a land claim that spanned the Tualatin River. He set up a ferry and later a bridge for travelers to cross to the new Boones Ferry Road.  As a teenager, George headed for Idaho to work in the mines, sending his pay back home.

Returning when the mines played out, George married Emma Walker.  They purchased land along Tualatin Sherwood Road and George became school board chairman, elder of the Congregational church and charter member of Winona Grange in 1895.

Around 1900 George purchased a Mitchell Lewis & Staver farm wagon and used it until his death when Joe Itel purchased it at an auction.  The original logo can still be seen on the axle.  Itel later sold the wagon to Mark Lafky and Lafky later traded it to Larry Lee in exchange for custom farm work.  The wagon was useful on the Lee farm, pulled with a tractor not horses, and was featured in several Crawfish Festival parades.

Larry Lee donated the wagon, then in pieces, to the Tualatin Historical Society in 2016.   During most of the 2nd half of 2016 and early 2017 Allen Steinke, a wainwright in Yamhill county, restored the wagon to its original look and glory–often having to hand-make parts no longer available.  While waiting for a suitable spot for display it was graciously stored in a horse barn owned by THS member Dawn Westphal.