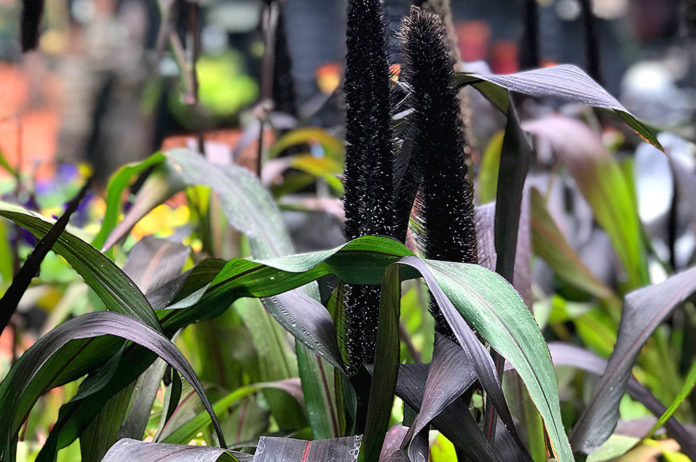 We were discussing it all at the coffee bar just yesterday morning. Running a plant nursery, we agreed, was interesting for many reasons but one reason certainly stood out: It made us fairly perceptive detectives. With often only little snippets with a gardener (and sometimes gloriously longer) we have been able to tell a lot about our fellow gardeners and somehow piece together how their lives and their garden fit together in their overall scheme.

So it wasn’t a surprise when on an early Saturday morning, just as the “Open” sign sprang into blue and red color, I noticed the movement of a few gardeners just outside the greenhouse deep into the tall grass section of the “Green” tables.

I had a deep hunch it was Peter, and from the growing intense discussion that I overheard, Adul, his long-time partner, was with him and already moving toward the Gardenstone pottery.

I had to smile though. Peter and Adul were easy gardeners to remember partly because of their uncanny synergy; they had a knack of finishing each other’s sentences and partly because I always seem to catch them joking and making each other laugh. To me they seemed to be in an interminably good mood.

This, despite how different of gardeners they were from each other.

Peter, tall, with stylish wire glasses that slightly magnified his sky blue eyes, preferred all the subtle differences of the various shades and hues of foliage. He’d often touch leaves and blades of grasses and then nod yes or no as if to confirm with an exactness what his eyes were catching.

Adul, on the other hand, thoroughly enjoyed all of the vibrant bloom colors of each season. He liked the instant energy color gave him and judging from his clothes, he was an expert at putting stylish shades and hues and tints together. Short, with dark tanned skin he wore his black hair in an indifferent windswept mess that gave him an air of absolute confidence whether in the garden or on the cover of a magazine.

Different styles and preferences but over the years they had drawn up a simple, straight-forward arrangement for their garden that played to their strengths. Peter would be able to call the shots to the right side of the front of their house and Adul to the left, including the garage. The dividing line would quite simply be the winding stairway that zig-zagged upwards to the front door.

Together, they created a garden that was something of a neighborhood sensation.

But this early morning, whether it was the change of the season or the mild change in weather patterns the duo were uncharacteristically at odds with each other.

“And where we’re going to put it.” finished Adul quickly.

The pot they had picked would be placed on a concrete landing along the zig-zagging stairway, directly at the midpoint, right along the division that separated their respective gardens. It was a no-mans land — disputed territory.

With that, Peter went straight away to the evergreen foliage and Adul towards the colorful Winter pansies. The garden duo had reached an impasse on how the pot would be planted. This revelation, I believe, threatened reasonable give and take everywhere. If these two good-natured, well-seasoned gardeners couldn’t agree on their garden what possible hope could we have for the rest of us?

It was an awkward situation that left me a bit speechless and quite literally standing in the cold. Seeing the two of them on literal opposite sides of the nursery I thought they could easily have been in two separate garden zones.

I approached Adul first, though horticulturally, I didn’t have much to offer.

“Pansies sure are vibrant!” I began cheerfully.

“Did you get a chance to see the blooms on the newest millet introduction?” I asked in hopes of starting a discussion.

But rare inspiration suddenly struck me still. It was like seeing a hummingbird on a bloom for the first time. I motioned to Peter excitedly.

“If you’ll give me a moment, I’d like to show you both something that might work!” I yelled out.

It was the millet that I pinned my hopes on. I looked again at the majestic, showy, diva-like blooms that swayed in the breeze against it’s shiny, strappy, burgundy-colored foliage. It should appeal enough in just the right doses for both of them if I could get them to see.

“May I propose to you both, the Purple Majesty Millet?” I said ceremoniously.

“What?” asked Peter “are you proposing exactly?” finished Adul

“Since this millet actually produces millet seed, may I suggest we plant your pot for the”

“Birds!” they both joined in.

The pot not only featured the flowering millet but we added colorful hypericum with berries and cotoneaster and just enough fine foliage and pansies that made both gardeners happy. I thought the entire creation befitting their already spectacular garden.

I suppose in a way creative diplomacy could be added to the list of a gardeners rewards. It may even be the way to solve disputes throughout the world. In the very least, a few birds could be pleasantly pleased.