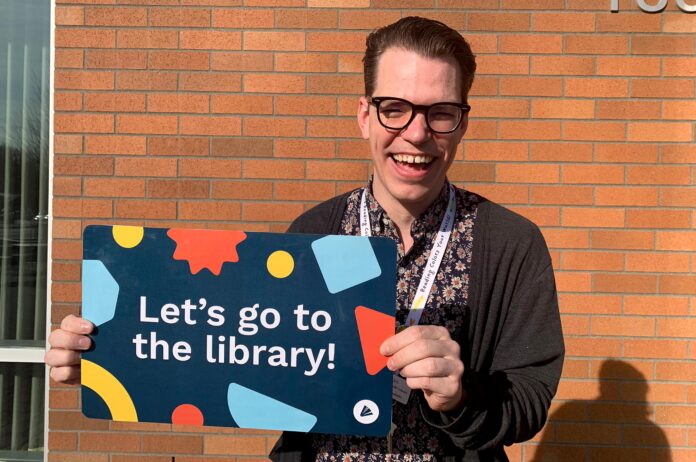 When Alec Chunn first fell head over heels for library life, he thought he’d make a career of curating picture books and hosting story times with the tiniest patrons.

But Tualatin’s new children’s librarian said it’s the older young readers he works with now who really inspire him.

When his focus shifted while running a reading group from elementary schoolers, it wasn’t the first time life surprised him. As an undergraduate, The Southeastern Washington native thought he was headed in a different direction when he stumbled into his passion.

“I came to libraries by accident,” he said. “I was studying theater education in college and took a class on children’s literature that basically changed my life.”

From there, it was all about the library.

Chunn boarded an eastbound train to Boston, where he picked up graduate degrees in Library and Information Science and Children’s Literature at Simmons University before returning to the Northwest to work as an AmeriCorps early literacy mentor.

He comes to Tualatin fresh from a five-year run with Eugene Public Library where he created school-age programming and coordinated outreach efforts to local schools and professional development for teachers.

“As a youth librarian, I feel that it’s my job to advocate for youth in the community. Youth and their families should feel ownership and investment in library spaces and programming. I want the library to feel like a safe place and a fun place, too,” he said. “I think our teen librarian Aimee Meuchel has done a great job of cultivating that sense with teens through the teen space and programming.”

It’s something he wants to replicate for grade-schoolers.

Chunn, who’s spent most of his life in the Northwest, says he was excited to make the move to Tualatin with his partner late last year. The couple had been eyeing the Portland area for a couple of years.

“We’re looking forward to having your new blood, your new energy in creating programs where we can get back together more,” Mayor Frank Bubenik told him at a recent City Council meeting.

This spring he’s virtually visiting fourth-grade classrooms as part of a program that puts library cards in the hands of every Tigard-Tualatin student and he hopes his excitement is infectious.

By teaching kids about everything their new cards can do, Chunn wants to let them in on a not-so-secret secret he learned long ago. “There truly is nothing more magical than a library card.”

For early elementary readers: Battle of the Bad-Breath Bats by David Bowles.

Cousins Malia, Ivan, and Dante are visiting their aunt Lucy for the summer. But on their way to Gulf City’s water park, they get lost on 13th Street. Only it’s not a street at all. It’s a strange world filled with dangerous beasts! Will the cousins find their way back to Aunt Lucy’s house?

Alec says: “It’s the first in a series called ‘13th Street’ that’s a great blend of funny and a little frightening. It’s also great for readers just starting to read independently but who aren’t ready for longer chapter books”

For older elementary readers: Amari and the Night Brothers by B.B. Alston.

A quest to find her missing brother leads Amari Peters to compete for a spot in the Bureau of Supernatural Affairs. She’s certain the secretive organization holds the key to locating Quinton—if only she can wrap her head around the idea of magicians, fairies, aliens, and other supernatural creatures all being real.

Alec says: “It’s the first in a trilogy and it’s a perfect book for fans of Harry Potter that feels a bit more current and contemporary. Plus, it’s going to be a movie!”

What Alec is looking forward to at the library: “I’m excited to kick off a new graphic novel book group for grades 4-7 called GNG. We’re going to read a graphic novel each month, then meet in Zoom to do an activity together and draw in the artist’s style.”

How I overcame my students’ question: Where am I ever going...

What Does Organic Mean Anyways?

Stop Telling and Start Asking ~ How to Use Curiosity Questions