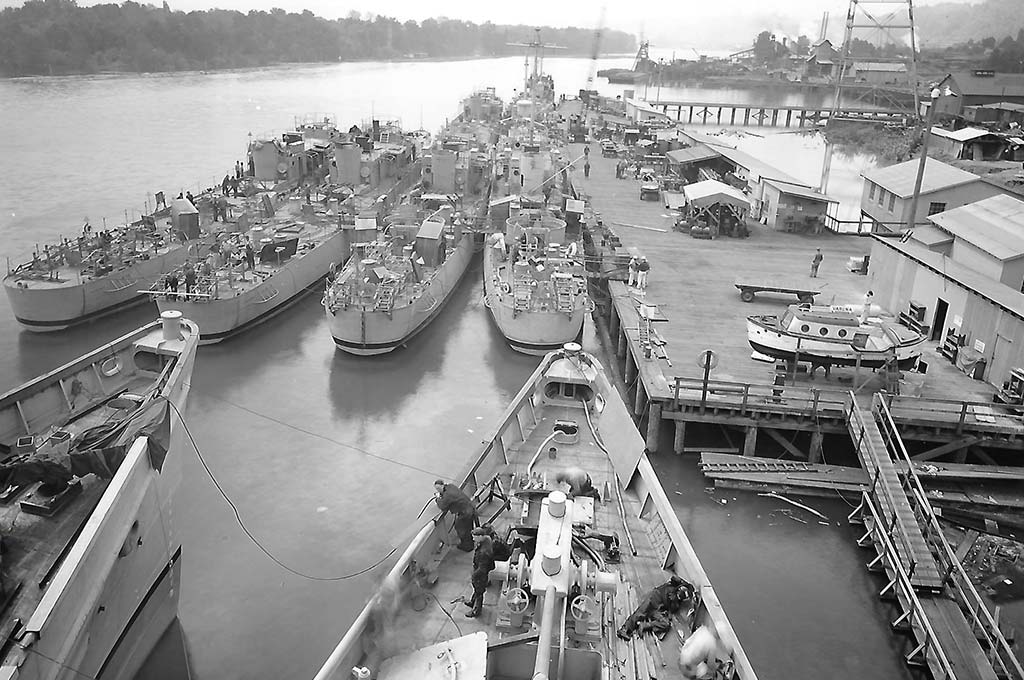 BY DALE POTTS
Retired Tualatin Businessman Ed Casey Jr’s family made a significant contribution to our countries’ emergency World War Two shipbuilding program, producing 206 ships in its Commercial Iron Works shipyard in Portland. Before America officially entered WWII, Axis forces were on the move. Germany was marching across Europe and into Africa. U-2 boats were sinking English ships faster that the Brits could build them. Japan was moving across China and searching for natural resources in countries across the Pacific rim. There was concern we would repeat our slow response to WWI when 80% of our ships being built were completed after that war. American leadership began preparing for WWII with an emergency shipbuilding program and other essential programs. We were not going to get caught short again and Commercial Iron Works helped in that effort.

Ed’s grandfather, William T. Casey started Commercial Iron Works as a foundry on the Northeast side of Ross Island Bridge in 1916. When expanded, shipbuilding operations were done on the western side of the Willamette River, on a 30-acre site straddling the Bridge. The construction shipways were upstream (south) of the bridge while the outfitting dock was downstream. When his grandfather died in an auto accident in 1934, Ed’s father, Edward L. Casey, was attending University of Notre Dame. He left school and returned to join family company as Engineer and Vice President.

At its peak, Commercial Iron Works employed more than 15,000 workers, operating 24/7 with three shifts and on weekends. They built 106 Landing Craft (159 feet long), 49 sub chasers (173’) and a host of other support ships including 16 Tugs (100’ to 205’) and barges. They converted seven Liberty ships, four for the British, into aircraft carrier escorts with flight decks. Workers used scaffolding and cranes to build the ships from the hull up with iron plates. Some were constructed in one of the three “steel ship buildings” with a shipway coming out of each. Others were build nearby and put into the water in outdoor shipways. Because of the shortage of men, women filled in at shipyards, making popular the names “Rosie the Riveter” and “Wendy the Welder”. Launching ships was the most exciting part of the process. The ceremony involved a female sponsor breaking a champagne bottle on the bow and then the ship slid down stern first, on skids or a railroad track system, into the Willamette River. Some were built from laying the keel to launching in 30 days.

Prior to launching, the ship’s basic components had been put in place. The outfitting stage prepared the ship for Commissioning, outfitting hundreds of things like radios, fans, troop bunks, and other necessary items. After fully equipped,
Naval and shipyard officials took the ship on a builder’s trial-run, down the Willamette to the Columbia. When it met Navy’s expectations, it was commissioned. Most launch-to-commissioning periods were between 10 to 15 days. After the war, their waterfront property was sold to Zidel which became America’s largest shipbreaking operation. Ed’s father moved on to another enterprise, heavy highway construction.

After graduating in 1969 from the Univ of Portland (Industrial Management), he worked as a local banker and realtor. He moved to Tualatin in 1973, when population was 973, with his wife, Joanne and children, Cristin and Steven. Ed helped
shape our city as it grew and continues to be a vital member of our community. He founded and built the 10 Minute Oilery on Boones Ferry Rd, just East of I-5 in 1981 with a second store in Aloha in 1990. The Oilery featured automotive lube and warranty services. During that time, Ed also helped found the Wetlands Conservancy and the Tualatin Chamber of Commerce. He sold his stores in 1999, expecting to retire. Upon “retiring”, Ed continues to serve his home town on Tualatin Visioning Committee. the Tualatin Area Aging Task Force and Tualatin Lions Club He also recycles cans and bottles for the Caring Closet
and helps with raising twin granddaughters!