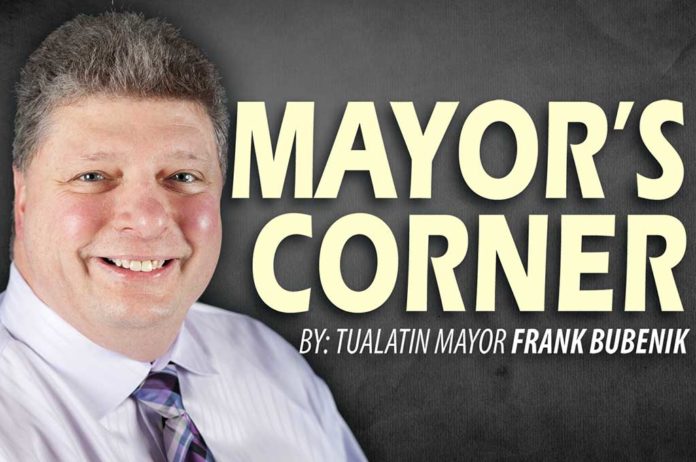 J. Sterling Morton, a Nebraska newspaper editor and resident of Nebraska City, had an enthusiasm for trees and advocated strongly for individuals and civic groups to plant them. Once he became secretary of the Nebraska Territory, he further spread his message of the value of trees.

On January 4, 1872, Morton first proposed a tree planting holiday to be called “Arbor Day” at a meeting of the State Board of Agriculture. Arbor Day was first celebrated in Nebraska on April 10, 1874, following a proclamation by Gov. Robert W. Furnas. Prizes were offered to counties and individuals for the largest number of properly planted trees on that day. It was estimated that more than 1 million trees were planted in Nebraska on the first Arbor Day.

Tualatin recognizes the first full week in April as Arbor Week to celebrate the many contributions that trees make to our lives and community, while Arbor Day is on Friday, April 30. Our annual celebration includes the kids’ poster contest and the Tualatin Trees Photo Contest. Unfortunately, the recent storm took its toll on our street trees. 144 street trees will likely need replacement, and 89 street trees fell or had to be cut down due to damage. But even with this damage, the City of Tualatin is recognized as a Tree City USA for the 34th consecutive year. The Tree City USA certification is awarded by the National Arbor Day Foundation to recognize communities that have proven their commitment to an effective, ongoing community forestry program.

Have you noticed the fencing around the splash pad in the Commons? Thanks to grant funding from the State of Oregon Parks and Recreation Department Local Government Grant Program and matching funds from the city, renovations are underway. The renovations include new spray features, colored concrete surface and a recirculating system of pumps and filters to improve water quality. The new features were chosen by the public during an outreach held at the ¡Viva Tualatin! event. The area around the splash pad and the restrooms will be closed during construction, which is expected to be completed this summer.

A cumulative total of 1,487,154 first and second doses of COVID-19 vaccines have been administered in Oregon as of March 20, and 1,858,385 doses of vaccine have been delivered to sites across the state. Please continue to wear a mask, even with increasing numbers of folks getting vaccinated. Wearing masks is an effective tool in helping to prevent transmission and helping to protect each other until we all are vaccinated.

You can be a charter member if you join VFW men’s...

Pat Carroll swiped a cake from Mess Hall as treat for...