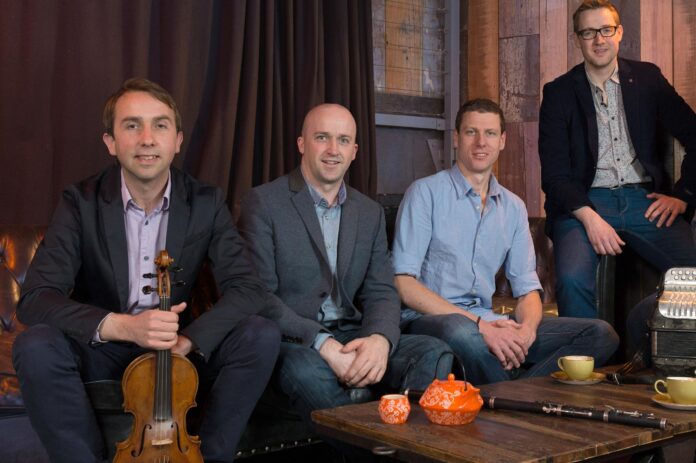 Ireland’s acoustic masters Téada return to Tualatin on Wednesday, August 24th, 7:30 p.m. at the Winona Grange. The date marks the band’s first return to Oregon since their 2020 Portland St Patrick’s Day concert was canceled due to COVID.

“We’re excited to be back at last!” says Téada fiddler Oisín Mac Diarmada.

The Irish band used the time to finish their first new album in nearly a decade, “Coiscéim Coiligh – As the Days Brighten,” a collection of Irish traditional tunes and featuring a guest vocal by actor John C Reilly, just released this May.

“Brilliant…perhaps their best album” says The Irish Echo, and The Irish Times calls it “a treasure trove of tunes. The urge to hear this music live is irrepressible.”

Téada (pronounced TAY-da), meaning strings in Irish, came together at the new millennium, and were quickly hailed as “Best Traditional Newcomers” (Irish Music Magazine) and for “keeping the traditional flag flying at full mast” (The Irish Times). Now a band in it’s prime, Téada has toured the world including the Penang World Music Festival in Malaysia, Harare International Festival of the Arts in Zimbabwe, and Edmonton Folk Festival in Canada.

For their sixth album Téada called upon actor and musician Reilly (HBO’s “Winning Time: The Rise of the Lakers Dynasty”), who the band met while he was in Ireland to promote a movie. Reilly was happy to add his noted singing voice to the 19th-century humorous ballad ‘Eileen Óg,’ in a duet with Téada vocalist Séamus Begley.

“The song provides the ideal tapestry to blend John C’s rich theatrical vocal talents along with Séamus’s unique sensitivity and nuance,” says Mac Diarmada. The track has received international airplay and is available as a free download at the band’s website: teada.com.

‘We look forward to performing at the Winona Grange,” adds Mac Diarmada. “Sam Keator always does a great job. We were delighted to hear that his organization S and A Irish Entertainment was recently recognized by The Tualatin Arts  Committee. He does a lot for the local arts scene.”

For tickets and further information visit TicketTomato.com at www.tickettomato.com/event/7604.

Has Someone Been Dethroned?