More than 10,000 years ago, massive floods repeatedly carved many of the distinguishing features of the Northwest’s unique landscape. Now, the City of Tualatin has been designated as the National Parks Service’s first partner community along the Ice Age Floods National Geologic Trail.

“The impact of these floods covers thousands of square miles in the Pacific Northwest, too large an area to be fully covered by a single site,” said National Parks Service Superintendent Dan Foster. “The efforts of many agencies to tell this phenomenal story are linked together through the Trail.”

As a designated partner, Tualatin will be identified as a hub for tourists along the Trail. The Tualatin Public Library will serve as the local interpretive center, providing information and amenities to visitors. For example, collectors of Passport to Your National Parks stamps can already receive a stamp for the Ice Age Floods National Geologic Trail at the library. 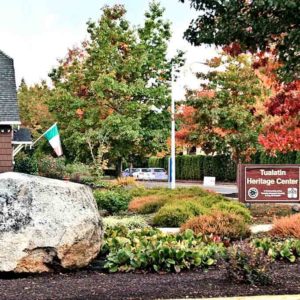 Tualatin has long promoted its connection to Ice Age history through features such as an Ice Age geologic timeline on a segment of the Tualatin River Greenway, Ice Age-themed play features at Ibach Park, the mastodon skeleton at Tualatin Library, and erratic rocks at the Tualatin Heritage Center. In addition, the proposed Ice Age Tonquin Trail – a 22-mile network of bike and pedestrian pathways – will traverse the city and feature interpretive displays highlighting local geologic features shaped by the floods. 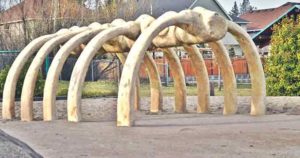 Efforts are underway to create a local nonprofit agency to support and promote Ice Age interpretive projects in and around Tualatin. For more information contact Linda Moholt at the Tualatin Chamber of Commerce, 503-692-0780.

Tualatin Public Library, 18878 SW Martinazzi Ave., has on display the bones of a mastodon found nearby in a flood channel, as well as displays of megafauna bones and small erratic rocks.

Tualatin Heritage Center, 8700 SW Sweek Dr., has displays of megafauna fossils and erratic boulders. Erratics are rocks not native to the region that were transported thousands of miles by icebergs in the floods.

Tualatin River Greenway: The newest section of the trail, which starts behind Tualatin Library, has several Ice Age interpretive features, including a geologic timeline of the floods, cast fossils, and erratic boulders.

Koller Wetland, SW Gram St. and SW 112th Ave., is a kolk pond with a wildlife viewing platform along the shoreline. Kolks are depressions formed by an underwater vortex caused by rapidly moving flood waters. There are several kolk ponds of various sizes around Tualatin.

Current ripples were carved out by the rapidly moving flood waters. A field with current ripples can be viewed across the street from Rolling Hills Community Church, 3550 SW Borland Rd.

Flood channels carried the flood waters into the Willamette Valley, then back out, over several thousand years. Two places where you can see flood channels include SW 65th Ave. at I-205 and Cipole Rd. at Hwy 99.

Itinerant Peddler to Merchandising Magnate: The Story of Aaron Meier

Oral Health in the Age of Covid