John McGuigan, a Navy World War II veteran credited with helping save the Battleship USS North Carolina after it had been hit by a Japanese torpedo, is celebrating his 100th birthday on December 8 at the Tualatin VFW’s Matthew Lembke Hall. Now a resident of a Tualatin Adult Care Center, he went on to serve 31 years in the Navy, rising to the highest Chief Warrant Officer level at the time, CWO-4.  Family members from all over the country are coming to join in the celebration.. 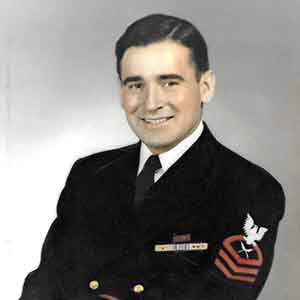 On September 15, 1942, the USS North Carolina was steaming off the East Coast of the Solomon Islands. Coming from below decks, John reached topside to see the aircraft carrier Wasp explode from three torpedo’s fired from a submarine. He saw men jumping overboard. They were later rescued by smaller ships and the ship was scuttled. Then a loud explosion on his ship as it was hit by a torpedo on his side, 20 feet below the waterline, causing the ship to physically rock.  He recalls a large splash and “he was drenched with water”. He knew that the ship had to be made watertight. As he ran to reach his battle station at Damage Control (DC) Center, the alarm “General Quarters, All Hands Battle Stations” went ship wide.  He passed through compartments that were flooding and slippery. At DC central, shipmates were putting details on a plotting board. He had the advantage of knowing where the torpedo had hit. He had trained at this job for over a year and knew immediately what to do. He passed orders over the horn to coordinate the damage control teams. Certain compartments had to be sealed, made watertight to stop the flooding. That meant closing hatches into compartments. Timbers were placed on the hatches to prevent water pressure from bursting them open. Tubes into the compartments also were sealed. The hatches were closed so fast, several crewmen were trapped inside, one a friend of Johns, The ship reached a 5.6 list before the damage control response quickly righted it, The ship returned to Hawaii for repairs. For propaganda purposes, Japanese radio reported sinking the North Carolina and its crew lost.  For a while his family believed he had perished at sea. John was transferred to shore duty but North Carolina was soon back at sea.

Earlier, in the Battle of the Eastern Solomon’s in August 1942, North Carolina’s anti-aircraft barrage helped save the carrier USS Enterprise, establishing the role of fast battleships as protectors of aircraft carriers. In all, North Carolina steamed over 300,000 miles, carried out nine shore bombardments, sank an enemy troopship, destroyed at least 24 enemy aircraft, and assisted in shooting down many more. Japanese radio announcements claimed six times that she had been sunk. .By war’s end, she had lost only ten men in action and had 67 wounded. Now it is a museum ship and Memorial docked at the seaport of Wilmington, North Carolina.

John was born and raised in Manhattan, New York, the son of Irish immigrants. Knowing America was to begin the draft, he joined the Navy because he was inspired watching Navy ships enter New York harbor.. When completing boot camp at Newport, RI, he was assigned to the USS Constellation, an 1812 sailing warship, where he learned seamanship. A year later he and 2,000 other men were assigned to the North Carolina; becoming a plank owners on America’s first battleship constructed since WW1. After Pearl Harbor was attacked, South Dakota headed for the Pacific Ocean through the Panama Canal.  One day the ship’s Commanding Officer asked for crew members who knew shorthand and typing. John had become proficient at both in high school so volunteered and moved to Yeoman rating.  Reaching Pearl, the crew maned the rails wearing summer whites uniforms as they entered the harbor. They were the first new Battleship to enter since the attack. John said “I think every person in Pearl Harbor greeted us, many watching from nearby hills, I can still hear the roar of the crowds. It was thunderous.”

There were 8 ships on Battleship row when the Japanese attacked. A ninth, a training ship, Utah, was docked nearby. The average water depth in Pearl Harbor is 45 feet so the Navy continually dredges a channel for ship access. Arizona was hit by an armor-piercing bomb, 1,177 dead. The remains sit in the mud, water depth is 40 feet. With superstructure removed, Memorial floats directly above. Oklahoma was hit by five torpedo’s and capsized, 429 dead. Refloated, capsized and lost under tow to mainland. Utah lost. West Virginia, California, Nevada, Tennessee, Maryland, and Pennsylvania were repaired and returned to service. USS Missouri, site for signing Japan-US peace treaty, is now moored nearby Arizona -reflecting the beginning and the end of WWII in the Pacific.

In 1946, John was sent to a bureaucratic office: the Coal Mine Administration in Chicago. President Harry Truman had ordered a federal takeover of coal mines after a devastating national strike by miners. McGuigan’s assignment seemed dull to him, setting up a filing system, but it was important organizationally. The high point was meeting his wife, Blanche,  a Navy WAVES (Women Accepted for Volunteer Emergency Service) doing secretarial duties.  They married on May 23, 1947. ““I give her so much credit,” John said. “I think about all the time I was away at sea, while she was raising a great family of five children.”  John’s Navy duties put him in contact with three great Americans. He worked directly for Admiral Chester Nimitz, Pacific Fleet Commander in Hawaii. The Admiral had to walk through John’s office to get to his own office. John said the Admiral practiced pistol shooting every afternoon, In 1951, John was at the Pentagon where he was assigned to escort General Eisenhower. Ike took a liking to him and arranged for him to join Ike at as his job in Paris as the first head of NATO. However, by the time John was reassigned, Ike was running for President. So John headed up the US Navy contingency working under General Omar Bradley.

In addition to USS North Carolina, John’s Naval career included duty on an ice breaker, and a hospital ship. His duty stations were in Greenland, Germany, France, the Philippines, Washington, DC, Hawaii. Virginia, Mare Island, San Diego, Los Angeles and Keyport. He retired in 1971. Now, 72 years after the end of WWII, he is getting a well-deserved WWII Welcome Home coin from the VFW Post.

Kick Off 2019 with Art Classes with Angie