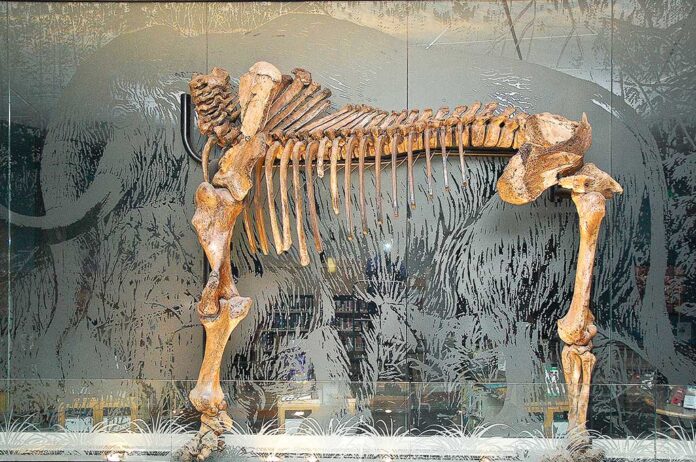 Despite the pandemic, the Tualatin Ice Age Foundation has had a busy 2021. In March, Dr. Andrew Boehm, an archeologist with the University of Oregon, and colleagues determined that the well-known Mastodon skeleton on display at the Tualatin Library could be a member of the newly defined Pacific mastodon species. It is the first reported specimen in Oregon and the northernmost specimen on the Pacific Coast. Later in March, a group of Tualatin Ice Age Foundation Board members gathered in the Tualatin Fred Meyer parking lot to look at the possible site of a new excavation effort aimed at finding the remains of mastodon and other species that once roamed the area. And then, in May, a one-ton chunk of volcanic rhyolite was lifted into place at the Tualatin Heritage Center.

There is an increased public interest in identifying and learning about the current relationship to the Ice Ages, which still affects our lands today. Area collectors and public places now open to the public have simply run out of room to preserve and display our ancient history properly. The Tualatin Ice Age Foundation was created to finance and provide space for local collections and displays and learn about Tualatin’s ancient history and the surrounding areas over 10,000 years ago.

Planned features Include additional Oregon ancient animal bones collected by several local individual citizens and Oregon Universities and unique histories of the Native Americans who lived in the area at the time. But collectors are running out of room, too and want a secure future for their collections too.

The Center will also be one-stop amongst several major interpretive centers to be built for the National Ice Age Floods Trail history.Further information and a current display of the Tualatin Mastodon can be viewed at the Tualatin Library or by contacting Ice Age Foundation Secretary Jerianne Thompson, Library Director, at jthompson@tualatin.gov or 503-691-3063.

There is still time to make a 2021 tax-deductible donation to help finance an Ice Age Interpretive Center in Tualatin. To donate or learn more about how you can get involved, contact Tualatin Ice Age Foundation Treasurer Linda Moholt at lindamoholt@gmail.com.

How Did We Do? Where Do We Go?