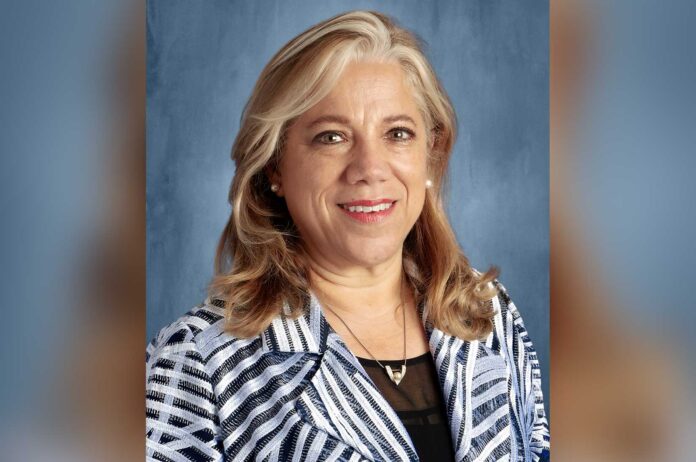 Tualatin High School’s newest associate principal and first Latino administrator may be new to the school’s leadership team, but she’s no stranger to the community and the district.

Claudia Kis, who comes to Tualatin from a 17-year run in the Woodburn schools, was an active parent as her now-grown sons worked their way from Byrom Elementary to graduation.

Kis, who was born in Argentina, immigrated to Oregon when her sons were young.  She’s proud to be breaking ground in district administration as a Latina woman.

“That for me is a source of pride because I’m showing the Latino community, and the girls, that they can do this,” she said.

She arrived in Oregon with an undergraduate degree in English Translation and a master’s in Psychology from the University of Buenos Aires, then earned an education degree with certifications in Teaching English as Second Language and administration at Portland State.

As one of Tualatin High’s four associate principals, each matched to lead programs that align with their strengths and areas of expertise, Kis oversees the foreign language department, English development, bilingual literacy programs, and other services that ensure an equitable, accessible education for students who come from homes where English is not the first spoken language.

“It’s really cool to see that what you bring to the table is being used to serve teachers and students,” she said.

She aims to increase the accessibility of school communications to ensure non-English speaking families are aware of opportunities for their students and equipped to help their kids navigate the challenges school can bring.

There are 26 spoken languages at Tualatin High School.

“I’ve been a teacher for a very long time, and I’m also an English language learner,” she said. “I know the challenges that students have in classrooms when they don’t speak English as their first language, and that teachers have when they’re teaching kids that don’t speak the language of instruction.”

Before shifting to administration 5-years-ago, Kis taught in a dual immersion program, mentored young teachers, and was an Oregon New Teacher Mentor Trainer.

After nearly two decades in Woodburn, she’s excited to bring her skills home to Tualatin at a moment when the district’s inaugural class of dual English and Spanish immersion students is beginning their freshman year.

This year’s freshman dual immersion students started as kindergarteners. The program has expanded grade by grade with them as they’ve progressed through school. They split learning time equally between languages.

Kis is also invested in making sure Spanish-speaking students who aren’t in dual immersion are set to receive the Oregon Seal of Biliteracy, which is awarded to recognize literacy in multiple languages and can be earned by taking one of multiple tests to demonstrate proficiency in listening, speaking, reading, and writing in both Spanish and English.

Woodburn helped pilot the Seal of Biliteracy program, with Kis involved throughout the process.

“It’s a really cool thing,” she said. “I hope, with time, we can expand (the biliteracy seal program) because 26 languages are spoken in this school.”

From the Cockpit to Commissary School

The Fruits of Summer’s Labor