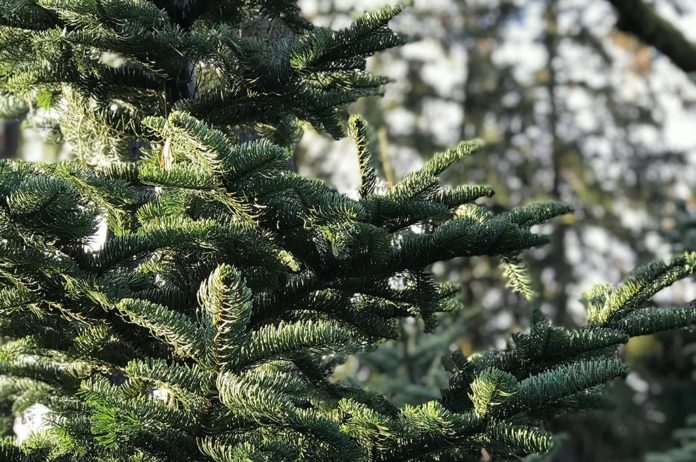 As I traveled past the city of Cornelius and into the adjoining wide open and scenic Oregon countryside, my delivery truck began to seriously lumber. I was headed up into some steep, forested hills, and I instinctively looked out my rearview mirrors.

Someone wanting to pass me on this narrow road was going to have a difficult time. It was well paved, certainly, but the deep gullies on either side made me sit forward with both hands on the wheel. A quick glance later, I was suddenly aware, however, that there wasn’t anyone behind me for miles. And, come to think of it, I hadn’t encountered anyone coming the other way for some time either.

I made a quick calculation of the effort (and difficulty) just to see these particular Christmas trees.

I was meeting a gentleman named Kyle at the “last known address” in the area, and from there, he was going to lead me to his particular piece of property where his trees were growing. “Be warned,” he told me before I had left. “Cell service over here gets spotty.”

He was right. After some old-fashioned map reading on my frozen screen, I found him parked tightly alongside the road. He must have intuited it was me because, after a quick wave, he motioned me to follow.

More uphill and tight turns later, he finally stopped with just enough room for both of us to pull over.

“Well, we’re here.” He said, getting out of his well-used and dusty Subaru wagon. I had to smile. “Here,” I suppose, is all relative.

Kyle was a tall, sprightly older man with a head of thinning, slightly mischievous wind-swept silver hair. His silver-grey eyebrows and matching scruffy not-quite-a-beard gave him an enviable look of a carefree, younger and modern version of Gandalf.

“I’m glad you made it,” he said, extending his hand with a firm, no-nonsense handshake. He gave me a quick look over. I had come prepared in my rain-gear and garden shoes and I must have passed his inspection because, much like meeting another gardener, I sensed an instant rapport.

“The trees,” he pointed. “Are just up and over there.”

As we hiked the steep incline, my breathing took on an uncharacteristic rhythm. It wasn’t like a conditioned athlete’s steady breath but rather more like breathing from a panting dog on a hot day. The air, it was definitely thinner, was my most likely excuse. My legs meanwhile, burned hot and bright under my rain gear, and I believe, began to earnestly weep.

Kyle, though, walked and talked effortlessly as if he were born a wood elf. His were long, easy steps interlaced with fascinating stories. He flew planes off of an aircraft carrier in Vietnam, he told me. (I later learned he served three tours there.) “After that,” he went on, “I went into intelligence.”

When we finally stopped, we were atop a narrow hilly ridge, covered with thick fluffy moss and small tufted mounds of browning grass. I took in the view of the dark green tops of the individual trees against the blue and white sky. The air was crisp. There was a unique silence of the place interrupted only by the chirps of chickadees as well as the gentle breeze against swaying trees. Below us were hills of green farms intersected sporadically by straight man-made roads. In the far distance was the characteristic sharp point of Mt. Hood and the flat top of Mt. St. Helens and to the left of that were the white peaks of some grouped mountain top that I was ashamed not to know the names.

On the downward slope of the ridge, there stood the group of noble firs. Abies Procera to be exact, and I estimated they were planted at least a dozen years prior. They were perfect specimens of what a noble fir would grow if left alone. Not full and branchy but rather sparse with distinct levels of strong horizontal branches. (Perfect for heavy or long ornaments.)

When we hiked down the ridge to get a closer look, Kyle told me more of his life’s adventures. After the war, he had found this place in the quiet and longed to build a rustic log cabin. But life, it seemed, had gotten in the way. He was sent to faraway places. More recently, he was called away for two years in Uzbekistan as well as Afghanistan. Because of his age, he was chosen to negotiate with Taliban warlords. There were guns and bombs, death and destruction. Many times he thought to himself, “This might be it.”

It was then that I suddenly realized that what I was hiking into was the other side of Kyle’s amazing life. Besides the adrenaline and the danger was his version of the garden. It was wild and untouched and it was his safe sanctuary.

“Do you want to see something really amazing?” He asked.

I couldn’t resist. We walked further into the deep growth of forest. The moss there grew so thick that plants and other trees began to grow on top of high limbs of other trees. Kyle had seen bears and cougars here as well as owls and hawks. I stared at the trunk of a tree that was old enough to have seen Native Americans as well as the first settlers.

I watched Kyle navigate the path forward and couldn’t help but wonder. Was his garden his home base to give force for his adventurous life, or was it the other way around- Because of the wild world he found himself in, his version of the garden gave him the solace he needed.

I’m not sure it mattered.

About that JUNK in Your Trunk

“Clouds on a Boat”

Autoimmune Disease: When “Self” is no longer Safe