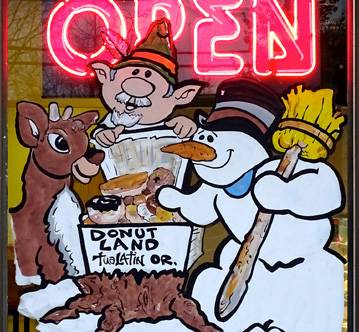 Steve Weichold, Window Painter. In one respect, the name says it all. But if you look for deeper meaning, it barely scratches the surface. Yes, the Tualatin artist paints on glass. But his story, like his work, is so much more complex.

You may not know it, but you’ve seen Steve’s work. It is all over Tualatin and all over the region, from Salem and McMinnville, reaching into southern Washington, and as far away as the coast. And with so much Christmas-themed demand for Steve’s art, it is especially prevalent right now. Yes, a fair share of those Santas and sleighs you see adorning local business windows were painted by Steve.

He’s been painting windows professionally for 40 years, and while he works year-round he still refers to it as his part-time job. Why part-time? Because, he says laughing, “I do it part-time, but all year round.”

Any artist will tell you it takes time, commitment and hard work to create and develop their style, but if there is such a thing as natural talent, Steve has it in spades. He began painting on Windows which he was around eight or nine years old. He explains that his career started entirely by accident.

“It wasn’t anything I planned on doing for the rest of my life,” Steve says. “I started painting my mom’s Bay Windows for Christmastime. Back in the late 1960s, when I was 14, a lady came over and asked if I would do her business window. I said I wasn’t interested, but then my mom said she would pay me five dollars! It grew from there.”

Unlike many artists, Steve (assisted by his wife Sharron) has a good sense for business. He has identified the types of businesses most likely to benefit from his services, and also the geographic factors which play into successful window advertising. One reason he’s been successful during the last 40 years is because he focuses on meeting the needs of his customers, he explains.

“There is a method to it,” says Steve, “and it is a matter not only of creating the right message, but identifying what sort of image will best convey that message.” He studies the economy, develop a marketing plan and budget suitable to their community. “It is great to help people with their businesses. I like to make a difference.

“Given the right circumstances, it’s very cost effective advertising,” he explains. “This is a good way of advertising for smaller businesses. I have about 300 regular clients I work with. I used to solicit a lot, but I don’t anymore. I have a Craigslist ad, which does a lot for me, and I get a lot of word-of-mouth business.

“Window painting says to drive-by traffic: something is going on here. The average driver might look for three seconds, so you have that much time to catch their eye and convey a message. It’s a very viable marketing tool, if you have the right exposure,” says Steve.

Steve has developed his own unique characters, which give his work a very distinctive look, reflecting his style. When he draws female characters they are frequently inspired by his wife Sharron’s eyes and face.

“In one picture, I made the girl character’s eyes brown, but Sharron’s eyes are green. Sharron noticed this, and asked me ‘who is that girl?’ I said, don’t worry, that is you. I just changed the eye color.”

If it sounds to you like Steve enjoys his job, then you’re absolutely right.

“The creativity aspect is wonderful,” Steve says. “It’s just awesome. I’ve loved the last 40 years. It’s been a wonderful run. I consider my skill a God’s gift. I was blessed with this ability to draw, and work on glass. It’s truly been a blessing.”

Officer of the Year