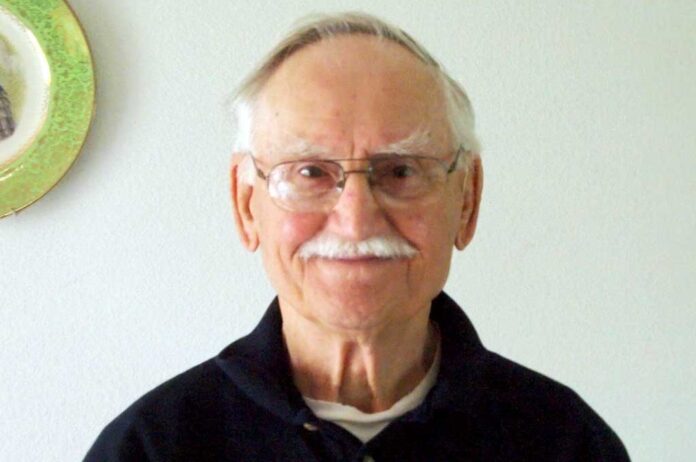 On December 7th, 1941, Japan shocked America and the world with a surprise attack at Pearl Harbor on the Hawaiian Island of Oahu. Tualatin resident Albert Montague was one of the defenders who survived.

Best known as Monty, he arrived in Hawaii on December 1 with two buddies from Stockton, CA, straight from boot camp. The three had volunteered together and then been accepted into submarine service; reporting to the submarine base (SUBASE) at Pearl for training.

A loud explosion caught their attention on their way back from their mess hall (eating area) early Sunday morning, December 7.  Looking up, they saw a low flying plane with red spots on the wings. One of his friends said it was maneuvers. Monty corrected him, yelling, “It’s a Japanese plane” and ran to the SUBASE Armory. His friends sought protective coverage under a nearby barracks building. While running, he saw a Navy Chief firing a pistol at Japanese planes flying several thousand feet overhead.

Inside the armory, he grabbed a rifle and a box of ammunition. He scrambled up the stairs of the 115 foot high SUBASE Diving tower, joining six other sailors. Together they had one machine gun, a BAR (Browning Automatic Rifle) and several rifles.  They set up the guns in the open windows at the top of the tower, overlooking the harbor. To their surprise, they found that the ammunition they had was incendiary.

From their position, they were shooting down at torpedo bombers making their deadly runs, flying low along the main channel.  After a while they determined their shots were going behind the planes; so set up a wall of fire in front of the planes.  One of the planes ran into it, started to smoke and turned off toward the outer harbor.

After that attack, Monty was asked to go in the SUBASE diving boat to the Battleship USS Oklahoma which had capsized. The diver got into the ship through the afterhatch, located under the stern 14-inch guns. He persuaded five sailors to follow him out of the ship and swim up through the water.  Monty and his group helped the five into the boat.  The diver went back for more; but the ship had listed, the hatch was under mud, and he could not find another entryway.  Those five and other survivors were brought to SUBASE where base showers were used to clean off the fuel oil.  Monty said the showers were covered with black oil and took considerable effort to clean them off.

Monty’s jumper (part of Navy enlisted uniform worn like a shirt or sweater) is featured at The National Museum of the Pacific War. The wall plague description says “Oil spattered jumper was worn by Signalman 2nd Class Albert Montague while rescuing sailors from battleship US Oklahoma.”

Later that day, he went to Hickam Field (Army Air Corps) with a work crew and saw three 3-story barracks totally destroyed, including the foundations.  He had noticed Japanese bombers flying over the field during the attack and figured they missed when dropping their bombs on the airfield.

As the day ended, Monty went back to the top of the diving tower where he could see the entire battle scene area.  He sat down and tried to write everything he had seen that day.   But later, when a submarine he was serving on was reported missing in action; this documentation was lost when the crew’s personal belongings were sent back to the states.

The Japanese had hoped the Pearl Harbor attack would prevent America from interfering with their military actions in Southeast Asia for access to natural resources such as oil and rubber. (The US stopped exporting oil to Japan in July, 1941.)  The first two waves of planes had focused on ships and aircraft. Fortunately for the US, all the aircraft carriers were out to sea.   A third wave was canceled which would have aimed at destroying Pearl Harbor’s fuel and torpedo storage, maintenance, and dry dock facilities. Admiral Chester Nimitz said that had the third wave been successful, it would have prolonged the war another two years.

Reportedly, Japanese Admiral Hara Tadaichi said the day after the mission, “We won a great tactical victory at Pearl Harbor but have awakened a sleeping giant – and thereby lost the war.” The attack did change public opinion about participation in the war against the three Axis nations.  On Dec 8, the US formally declared war on Japan.  A change in US policy, to actively support Britain, led Germany and Italy to declare war on the US on Dec 11 and America reciprocated on the same day.

Every time I visit Oahu, I tour the Arizona Memorial.  On my last visit, in June, I was told by a Pearl Harbor Survivor who was assisting tour guides, that there are only 367 survivors remaining.  I was unable to verify that figure but learned from Monty that both the Pearl Harbor Survivors Association and the WWII Submarine Veterans have turned in their congressional charters because of reduced membership.

I was actively involved in the 50th Commemoration Ceremony.  In February 1991, I went to Pearl Harbor to write the Operations Order Annex which became the Public Affairs directive for all branches of the Armed Services. Then I returned for the Commemoration where I was the JAVIT (Joint Audio-Visual Information team) Director, coordinating joint military teams documenting the event. It was the first time for most to work with other services.

The Commemoration was covered by more than 1500 television, radio, and print media from around the world. Two results stand out. Veterans on both sides, who had a lifelong hatred of their war enemy, were finding inner peace through forgiveness gained at the Commemoration. The second was the realization that Japanese school and history books at that time did not mention Pearl Harbor but did feature the August 1945 atomic bombing of Hiroshima and Nagasaki. Publicity from the Commemoration forced the addition of how Japan started the war at Pearl Harbor.

Monty and his wife moved to Tualatin in 1994 to be near family. They are well known at the Juanita Pohl Senior Center.

Wildlife Narratives in the Artwork of Debra Hornibrook

Students to Return to Schools, In-person Classes for Elementary Students

David Dehart had a fascinating 20-year career in the Army, starting...