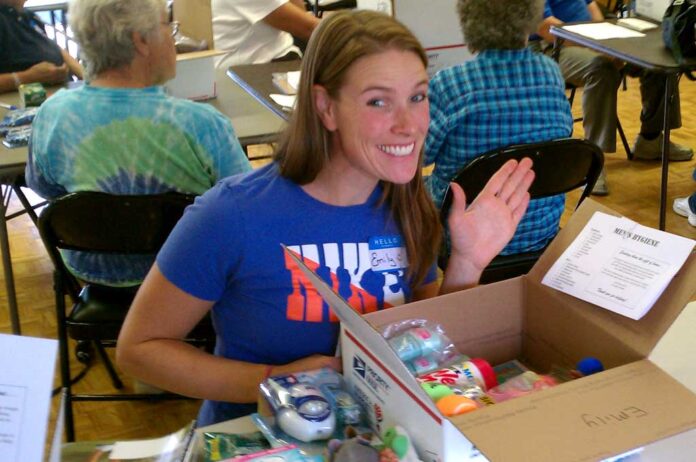 Nearly 90 folks showed up at the King City Civic Center on September 30 to prepare care packages for deployed military members.   They packed 230 boxes which are being sent overseas to military serving in harms way. They also donated over $900 to help pay for postage to ship the boxes.

Event organizer Jennifer Fair said that over $16,000 worth of materials were available at the packing party, including brand names such as Gillette, John Frieda, Finesse, Pantene,  Crest, Irish Springs, Dove, Axe, Mitchum, Degree, Carefree,  and Wisk.

Nearly 300 beanie babies (valued at $1,500) were donated for the event for the soldiers to give out to kids in  Afghanistan for goodwill.  Some are kept as mascots to improve morale. Also included in the boxes were Sunday Comics,  donated by a local civic group, a huge morale booster that is shared with others.

Those attending were thrilled to listen to a Marine who has received these care packages, Cpl Jonathan Lovejoy. Home on leave and wearing his uniform, Cpl Lovejoy gave a lively presentation that explained how the care packages travel overseas and how much the recipients appreciate them.

Cpl Lovejoy is the brother of Renee Atkins who shares responsibility with Jennifer in this activity.  Jennifer and Renee began sending care packages a year ago. They named  their non-profit organization “Operation Christmas Glory” after an early recipient sent a thank you note, saying that opening her care package was like having Christmas.

At the event, Cpl Lovejoy met Grandma LuDene who had sent him and many others delicious home-cooked treats.  She said she feels that these military members are “just family”.

Jennifer said there were at least ten people at the event who came because they read about it in the last issue of Tualatin Life.

Tualatin has two drop box locations for coupons and supplies – Tualatin Auto Body at 19705 SW  Teton Ave (503) 692-1579 and Tualatin Petco (near Haggens).  The organization is seeking more locations in Tualatin and also looking for facilities and groups to host future packing parties.

Pat Carroll swiped a cake from Mess Hall as treat for...