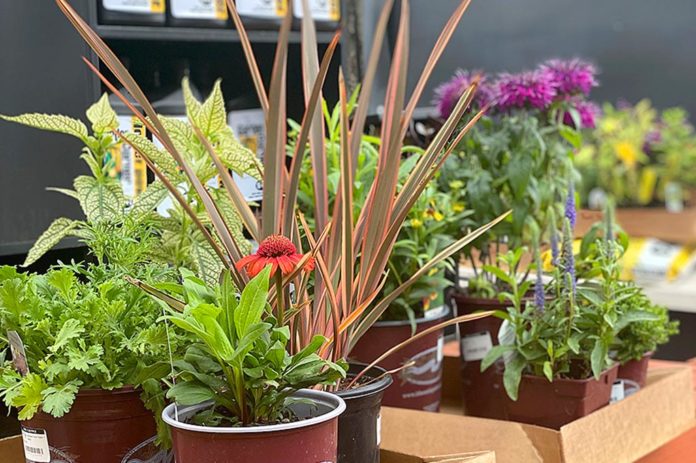 I was in my own world, trimming busily with my shears against the bright red new growth of Eugenia. These plants were supposed to be in a razor-sharp spiral but had instead grown the plants’ version of long hair and beards. This, despite them being front and center in the nursery and along a path I walk on a dozen times in a day.

I had to shake my head in my current quest for mindfulness. These plants had quite literally, grown in front of me.

But it was Bill’s voice across the nursery that brought me back to reality. I smiled instantly when I heard him because he’s a fairly loud talker but also because he’s funny.

“That’s just the thing with you!” I heard him talking to Ryan. “You’re always so happy to take my credit card and any other money I might have. If I had a real question, I’d know you’d hesitate. If I offer my credit card? Not a second of hesitation from you.”

I snickered under my breath. Bill was a short, stout man with a round face and eyes that gave away instantly his underlying mischievousness. I had to double-check on Ryan, though. We get serious questions from gardeners of all personalities and I wanted to be sure he knew what he was up against.

Like many things that come up on my radar, it was a wasted worry. I could tell by Ryan’s grin that he too was enjoying time with Bill.

I instinctively scanned the nursery, however, looking for Bill’s wife, Karen. Over the years, I noticed while the pair always came in together, they shopped for their garden quite separately. It interested me because often in a day I’d find myself in-between spouses, attempting to hear both sides and often translating separate wants and needs into some sort of common agreed-upon plant pick. Never with Bill and Karen, however.

They individually had their garden preferences and quite happily chose and picked on their own. Because they knew what they liked (and what they didn’t), they were both a joy to help. I initially thought this “separateness” was some sort of a learned line of demarcation of battle that happens in years of marriage. But for Bill and Karen, it just wasn’t so.

I’ve quietly witnessed them meeting at the checkout, showing each other their plant finds. They would ask each other questions and genuinely compliment each other on their picks. If I hadn’t known better, I’d thought they were at the beginning stages of dating.

And almost always, they’d end in a laugh (or chuckle) as Bill discovered something humorous in the moment.

On this occasion, though, the pair’s nursery reunion was abruptly interrupted. Ryan, who’s particular strength is paying close attention to detail, had seriously overcharged Bill. I could see the concern on Ryan’s face as he tried to explain.

“You overcharged me for four dollars?” I heard Bill loudly exclaim. There was a cavernous pause as he looked squarely at Ryan.

I stopped my pruning.

“Did you hear that, honey?” He suddenly turned to Karen. “Ryan here has left me with four dollars!” He riffed. “I can take you out to lunch! Today we can go anywhere you like!”

Ryan and I had to laugh.

Later, we watched Bill and Karen leave, each happily carrying their individual boxes of plants. Ryan had a smile on his face as he gave an extra wave. “Funny guy,” he said.

For me, Bill, as well as Karen, managed to lighten our mood. They seemed well suited for each other; independently strong, allowing plenty of room for the other to grow. They reminded me of two complementary plants growing well together in the garden.

And, in a way, when the world is so uncertain and seemingly a bit out of control, it was refreshing to have people who were genuinely uplifting.

As for Bill, his natural humor gave us a bit of pure cheer. His energy was invigorating as a summer breeze and, in this uncertain time, left us perhaps with a better sense of control. Also, I’m most sure his effect in our nursery wasn’t his only place, and we weren’t his only people.

Though for that day and most any other day, I’m appreciative of him.

Growth Even in Winter