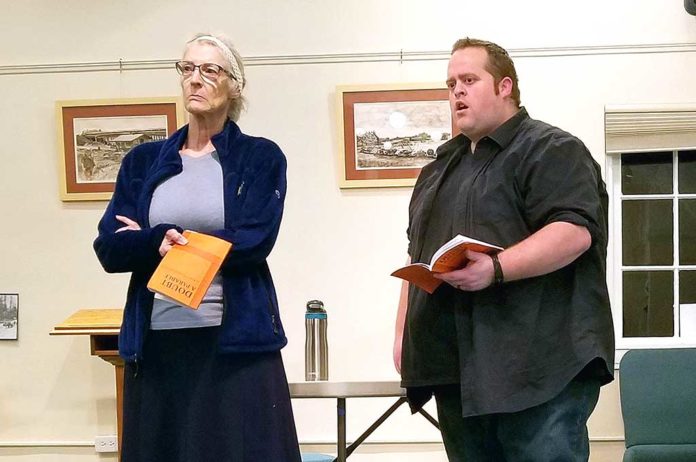 “What actually happens in life is beyond interpretation. The truth makes for a bad sermon. It tends to be confusing and have no clear conclusion” –Father Flynn

Mask & Mirror Community Theatre opens “Doubt, A Parable” at the Tualatin Heritage Center on January 18, 2019. In this brilliant and powerful drama, Sister Aloysius, a Bronx parochial school principal, takes matters into her own hands when she suspects the young Father Flynn of improper relations with one of the male students. It is a gripping story of suspicion cast on a priest’s behavior that is less about scandal than about fascinatingly nuanced questions of moral certainty. The show plays Friday and Saturday at 7:30pm, and Sunday at 2:30pm until closing on January 27. All tickets are $10 and are available online at www.MaskandMirror.com/box-office. Advance purchase is suggested due to the small, intimate theatre space. Discretion should be used in bringing children to this play due to the themes explored.

“I was first introduced to ‘Doubt, a Parable,’ doing research for a scene study that I was directing,” says Aaron. “I was drawn in by the power of the climactic confrontation between two of the characters. During preparation for bringing the scene to life, I was struck by the way even a small change in motivation or intent of a character could lead an observer to draw a much different conclusion of who was right and who was wrong. In many ways, that is a reflection of the power of uncertainty in our social interactions – how do we individually assess those whom we warily regard with suspicion, and those to whom we graciously provide the benefit of the doubt?”

“Doubt, A Parable” is the first show of this season’s UnMasked presentations at the Tualatin Heritage Center. UnMasked shows are selected to present unique plays of merit not usually produced by all-volunteer, nonprofit community theatre; especially plays that are edgy: having a bold, provocative, or unconventional quality. They are presented in partnership with the Tualatin Historical Society and funded in part by grants from the Cultural Coalition of Washington County; the Oregon Cultural Trust; and the City of Tualatin Arts Advisory Committee.

Mask & Mirror Community Theatre also presents three family friendly plays each season on their main stage at Calvin Presbyterian Church in Tigard. “The Boys Next Door,” a dramedy about living with a disability by Tom Griffin, opens there on March 2, 2019.

Mask & Mirror Community Theatre is now in its 8th season of presenting high quality and affordable (no tickets are more than $15) live theatre to the citizens of Tigard and Tualatin – using all-volunteer actors, stage crew and administrators.

Participation and membership is open to all. We welcome experienced performers and theatre “wannabes” – we’ll train you!

The Garden From the Outside Looking In