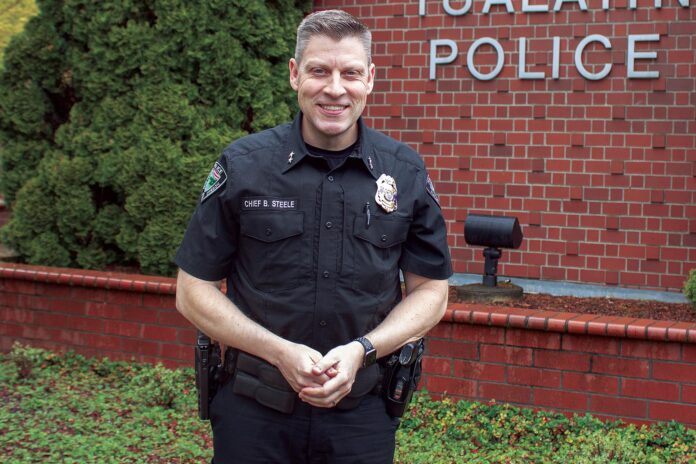 Tualatin Police Chief Bill Steele is retiring in June, leaving behind a legacy of “terrific” leadership with accolades coming in from city officials and the community.

Mayor Frank Bubenik said of Steele and his contributions to the community: “Chief Steele has been a terrific police chief. He has always been very accessible to the community and has hired terrific police officers to protect our safety. He led the department through some difficult times recently with the murder of George Floyd and its impacts on policing and with the COVID pandemic.

“I was greatly impressed by the department’s transparency during our Community Conversations on Policing and the actions taken in response to the community’s feedback. He will be greatly missed, and I wish him and his family the best in retirement.”

Steele said he will take some time to decide what he wants to do after spending his career in both the military and law enforcement. After four years in the Air Force, Steele knew he wanted a career in law enforcement and the opportunity to serve his community, which he has done entirely in Washington County.

He joined the Washington County Sheriff’s Office in 1996 as a patrol deputy and moved up through the ranks to chief deputy, where he managed nearly 450 employees. In 2012, Steele was assigned as the City of Forest Grove’s interim Chief of Police.

In 2016 Steele became Tualatin’s Chief of Police, saying, “Tualatin is such a great community. We are very fortunate that the city supports its police officers. Our police officers do a great job taking care of the community. And we are fortunate not to have the challenges of larger municipalities.

“Our last two murders were in 2017, but you always have to be ready. It can happen at any time.”

Tualatin currently has 39 certified officers, which is its maximum number; the department recently hired a couple of officers, and Steele thinks there will be a couple of vacancies coming up in the near future. “We get good applicants,” Steele said. “Tualatin has a good reputation and is recognized as a solid place to work.”

Steele said the Police Department has a good response time to calls for service, noting that it varies depending on the time of day. “We have enough officers to respond quickly, and if that ever changes, we will ask the City Council for more funding,” he said. “We have to be smart on how we allocate our resources, and we get good feedback on our response times. Tualatin is a safe community.”

That carries into the schools, with two School Resource Officers assigned to Tualatin High School, which has 2,000 students, who also fill in at the other lower-level schools.

Acknowledging that the last couple of years have been tough due to COVID-19, Steele said that “we deal with human beings, and this has been a very stressful time for people.”

With that said, Steele explained that Tualatin’s officers are provided with hours of crisis-intervention response training, and Tualatin shares a mental health clinician, who is based in Tualatin, with the Tigard, King City and Sherwood police departments and responds with officers.

People with mental health issues and/or are homeless are much more visible than they used to be, according to Steele, but he said that the homeless are not as visible in Tualatin as they are in other cities.

Steele said he still remembers the first time he took someone into protective custody because it was such a rare event, “but now it happens every day.”

“We’re here to make the situation better,” Steele said. “When people call the police, something has gone wrong in someone’s life, and we work to resolve it. Many times, that is not so easy, but that’s what we’re in this for. All police officers are community members and try to be of service. Deep down, public safety is one of the most valuable services a city can provide.”

While Tualatin has a population of 27,000, “not everyone deals with the police,” Steele added. “But when they do, they want professional, trained, compassionate officers. Our officers are proactive in the community and do a wonderful job. Tualatin is a desirable place to live, work or play. I have been honored to be the Chief.”

“Chief Steele has dedicated his entire career to public service through law enforcement, and Tualatin has been blessed to have him at the helm of the Tualatin Police Department these last six years,” she said. “Bill has beena strong and steady force in the community and the (Police Department). He understands the value and importance of relationships and responsiveness, and he has worked hard to build both. Bill’s leadership helped guide us through challenging times.”

Lombos added that the city is currently accepting applications for the Police Chief position and will be interviewing candidates in May, with the goal of swearing in a new Police Chief around July 1.

While serving as Army sniper, Tualatin Soldier had leg amputated from...