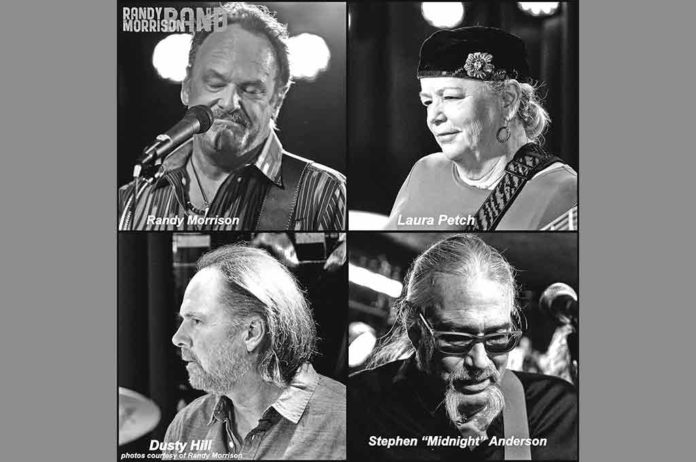 New Year’s Eve will find the Randy Morrison Band rockin’ out New Year’s Eve at the C & I Bar & Grill (on the corner of SW Tualatin Rd. and SW Boones Ferry Road in Tualatin, Oregon). Will you please join us? This venue has a big dance floor, great food, a welcoming “vibe.” They have been operating under the same ownership now for 40 years. They serve delicious food at a reasonable price and food is served “with a smile.” They also have a happy hour, serve breakfast and offer a wide variety of menu items for any preference!

Randy Morrison comes from a musical family, no doubt about that. From an early age, he wanted to follow in the footsteps of his musical family where his mother and her father, (Randy’s grandfather), all shared their love of playing music and playing various instruments. Randy sang his first solo in front of people at the age of five at a school event. He credits his mother as a major influence on his decision to become a musician.

Morrison is from Portland, Oregon but also lived in Florida. He has been playing in bands since the 80’s. His music is, as Morrison describes it effectively “a mashup between blues, soul, r & b, funk, and rock. It is bluesy, funky fun!” Morrison plays electric and acoustic guitar and sings.

Morrison says he has different favorite artists for different reasons but as long as he can remember he says “Steely Dan has been my all-time favorite band because of the great writing, chord changes, harmonies, and the individual players they used. I really like the pop-edge wrapped up in complex melodies and so forth.” When asked about his favorite song to play in this band he replied: “I really love playing a song that Stephen Anderson wrote and it’s on our album, Hard Place, called “Trouble” which was released in April of 2018. It just has the coolest groove and some nice harmony guitar stuff and even a tasty sax solo!” The CD can be purchased online through iTunes, Amazon, Google Play, CD Baby and more. It is also available at your local record store Music Millennium.

When Morrison resided in Florida, his first band was a group consisting of two of his Air Force buddies on drums and guitar. He had a civilian man from town playing bass. The band, at that time, was called Staggered Image. Morrison also played in a band called “Tuxedo” playing at weddings and casual events. “Yes”, Morrison says, “we wore tuxedo’s.” He wanted a change so he went to the heavier rock side with a band called Rampage where they performed old classic hard rock songs like Iron Maiden, Judas Priest, the Scorpions, etc. After moving back to Oregon, Morrison started a power trio band in 1992 called Allies playing current rock material.

He left the music scene to start a family but returned to playing music again. He says “I went out on a limb, and play stripped down acoustic stuff.” He says, “that went well, and still does but I got the itch to play with people again as well and the current band was born.” He enthusiastically says: “I love to play music for people who know music.”

On guitar and vocals is Stephen “Midnight” Anderson, Laura Petch, Bass and vocals, Dusty Hill on drums. For New Year’s Eve, they will have Drew Baird on Sax (he plays with them often).

Laura Petch is a veteran of Portland’s blues musician community and was an original member of NW Women in Blues. Stephen “Midnight” Anderson, on guitar and vocals, is also a long time veteran of Portland’s blues music community, and who started the band “Midnight Blue” with Laura. On drums is Dusty Hill. he has toured with various groups such as The Coasters, The Drifters, and he was also the drummer for the popular local Portland band Sleazy Pieces.

His plans for the future? He says to “keep playing, and it is time to start working on some new material for our next recording.” For more information about this band visit their website: www.randymorrisonmusic.com/band/the-band. Please visit the C & I Bar & Grill’s website for more information www.cibarandgrill.com about music listings, menu items, etc.