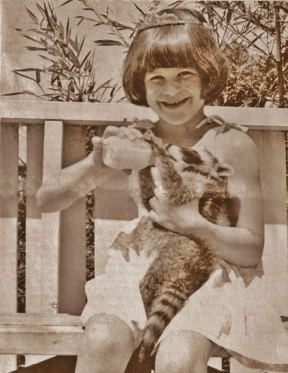 Between 1960 and 1970 Tualatin’s population rose from 359 to 922. The Hervin Company’s trucks were proclaiming “Tualatin—Going to the Dogs”, and the freeway was making Tualatin a desirable place to settle.
In May of 1962 John (Bob) George dug up a mastodon in the swamp behind where the Fred Meyer store is now. John was taking a geology class at PSU and remembered old Charlie Roberts telling him there
used to be elephants roaming around Tualatin. The bones now grace the Tualatin library, and a tusk and molar can be seen at the Heritage Center.

The fiercest windstorm ever recorded in the Northwest tore through Tualatin on the afternoon of October 12, 1962, Columbus Day. Winds up to 116 miles per hour raged up from the south and
blew out to sea near Seattle. The storm lasted two hours in Tualatin and when it subsided, uprooted trees were lying across buildings and roads, power poles lay snapped in half with their live wires
sending out sparks. Several homes caught fire and the Fire Department summoned all hands to help in the emergency. Dr. Merle Pennington set up shop in the Fire Department to treat injuries. Electricity was out for a week, and since there were still some dairy farms around, cows had to be milked by hand and the milk dumped on the ground as there was no refrigeration.
To read full article “Click Here”

Passport to Parenting: Quality vs. Quantity

Chase Away the Winter Blues