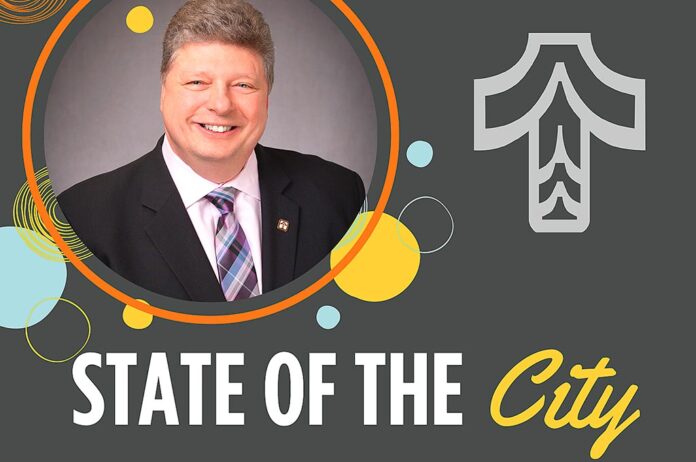 “It takes a village” is a common expression used for raising children, but the same could be said for Mayor Frank Bubenik’s 2021 virtual State of the City presentation May 12. He called on a village of city councilors and City staff to showcase the city’s many accomplishments during 2020, an especially difficult year due to COVID-19.

Bubenik let them do the talking, although he was put on the hot seat following the pre-recorded presentation by answering live questions from the public in a segment hosted by Eric Schmidt.

City Council President Nancy Grimes started off with how the City responded to help citizens and businesses after the first cases of COVID were diagnosed in March 2020, and pretty much everything shut down.

“The City provided three rounds of aid to small businesses totaling $800,000 and provided scholarships for families with childcare challenges, and City volunteers made cloth face coverings to hand out,” Grimes said.

And the City partnered with the Tualatin Chamber of Commerce on the Gift Cards for Good program in which people could purchase gift cards at businesses to donate to families in need.

Director of Information and Maintenance Services Bates Russell, who is the 2020 Employee of the Year, said the City staff never stopped working, either virtually or in-person utilizing staggered shifts and other techniques to stay safe.

Library Director Jerianne Thompson and City Councilor Maria Reyes discussed how library services were adapted to continue to meet the public’s needs during the pandemic. There was virtual programming including reading stories, trivia games and online live book discussions that garnered more than 3,000 views each month. Craft supply kits could be picked up curbside, and there were more than 9,500 items checked out each month.

At the Juanita Pohl Center, online fitness classes were offered with more than 2,000 people participating virtually.

City Councilor Cyndy Hillier highlighted some of the innovative programs and activities that took place during the year. Even though the city’s premier event, the West Coast Giant Pumpkin Regatta, had to be canceled, it continued in spirit. Posters commemorated the event, and a Terminator Weigh-Off was held, with the winning pumpkin weighing in at 2,047 pounds.

A very popular event was the Holiday Lights Parade, when about 90 community vehicles and Public Works vehicles decorated and decked out in lights traveled along three parade routes during the month of December.

Instead of a breakfast honoring veterans at the Juanita Pohl Center, there was a video tribute along with lawn signs. And the Put Down Roots program utilized 227 volunteers to plant trees and other plants throughout the city.

City Councilor Valerie Pratt talked about the Tualatin Moving Forward program, noting that 10 bond-funded projects were completed, including a crosswalk in front of the Marquis facility on Boones Ferry Road.

Public Works Director Jeff Fuchs talked about transportation projects in the city to improve safety. In addition, the Tualatin Arts Advisory Committee selected some public art projects to be installed around the city.

City Councilor Christen Sacco talked about improvements to City parks and playgrounds, and Parks and Recreation Director Ross Hoover discussed the completion of the Reimagine Stoneridge Park project as well as finishing the conceptual plan for a veterans’ memorial, which will be located at the Tualatin Commons.

Bubenik talked about the importance of Black Lives Matter activities and said he was pleased to have signed the Reimagining Policing Pledge with groups of community members holding conversations and coming up with six recommendations for the Police Department.

Police Chief Bill Steele noted that one of the recommendations was providing regular updates on what the department is doing to the City Council and the community. “We are prioritizing education and transparency,” said Steele, adding that the public submitted more than 50 questions.

City Councilor Bridget Brooks discussed planning projects and the City’s vision for the future, Tualatin 2040, that will include updates to the comprehensive plan and development code focusing on providing a diversity of housing and a climate action plan. The City Council approved the annexation of the 65-acre Basalt Creek area that when developed will bring a diversity of housing and one or two parks.

“We had a busy year in Tualatin,” said Bubenik, who at that point went live to start answering questions on a variety of subjects from the public.

On when light rail might come to Tualatin, Bubenik said Metro may put another light-rail transit measure on the ballot in a couple of years.

On what the City is doing to mitigate traffic congestion, Bubenik talked about the Tualatin Moving Forward program with several projects completed in the city. Plans are in the works to “tweak the lights” on Tualatin-Sherwood Road between Martinazzi Avenue and Interstate 5 to speed up the traffic flow.

Someone asked if the City is going to do anything about the empty commercial buildings in the downtown area. Bubenik said one option is forming an urban renewal district in the area between I-5 and the Tualatin Post Office to redevelop the area. “I know folks are frustrated with the empty store spaces,” he said.

According to Bubenik, plans are underway to widen Tualatin-Sherwood Road between Sherwood and Tualatin Auto Body on Teton Avenue. “Construction is 1 to 1 ½ years off,” he said.

Bubenik is looking forward to the Basalt Creek area being developed into a variety of housing options, and he noted that Community Partners for Affordable Housing has already purchased land there and is planning to build 110 units of affordable housing, with construction starting next year. “There will be more multi-bedroom units instead of just having one or two bedrooms,” Bubenik said. “But then Tualatin will be built out except for infill unless we extend our boundaries.”

Schmidt asked Bubenik what a maker space is, and Bubenik explained that it is a creative place with tools and/or equipment to develop new skills. One is being completed in the Tualatin library that will encourage interest in STEM or STEAM (Science, Technology, Engineering, Art and Math) programs and provide such items as a 3-D printer and video-production equipment. “You don’t need to go to college to get a good job,” Bubenik said. “We are putting the finishing touches on the library maker space and decided to leave the library closed a little longer to get it done.”

Asked when the Juanita Pohl Center will open, Bubenik said the City is following state guidelines. “When we have a 70 percent vaccination rate, then we will look at reopening it,” he said.

Someone asked if the City would continue holding the virtual events that were created during the pandemic once life returns to normal, and Bubenik said some would definitely continue such as the Holiday Lights Parade and virtual book readings at the library. “The City will continue to do some virtual programs,” he said.

After answering more questions, Bubenik said his hope for the future is that there will be decreased traffic congestion, a wide variety of available housing options and a healthy business community all within a city that is prosperous.

“I hope we continue to be diverse and respect all cultures and remain one of the best cities on the West Coast, let alone in Oregon,” Bubenik said.

If you missed the 2021 State of the City presentation, you can watch the complete presentation on YouTube at youtu.be/XgNoMBGGpw8.

Jessi’s Fight for Her Life

How Do We Celebrate Thanksgiving?