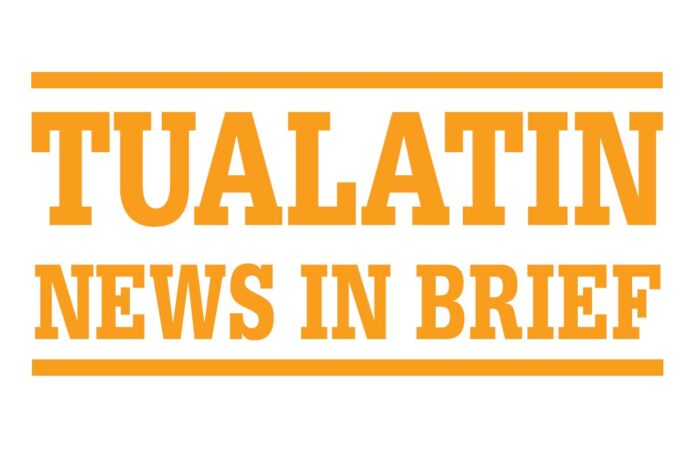 Domestic violence has always been a serious issue, and both law enforcement and the city council chose this month to emphasize the matter and show support for victim advocates, service organizations and crisis hotline staff.

Steele said the Police Department is planning to highlight the issue during the month of October.

“I don’t really have anything for the Council,” Steele said. “But October is Domestic Violence Awareness Month, so we’ll be doing a few things to promote that during the month.”

Meanwhile, the City Council is putting its money where its mouth is by giving $2,000 to the Domestic Violence Resource Center, a Washington County nonprofit organization advocating for and assisting female victims of domestic violence. The grant is just part of $40,000 in money awarded by the City to various nonprofit groups this year.

The Tualatin Police Department was recently recognized for its workplace culture by being given a 2020 Top Workplace award by The Oregonian newspaper.

The Top Workplace awards are based on employee feedback gathered by Energage, LLC, a private technology company that focuses on workplace culture, employer branding and employee engagement.

There were 95 companies across Oregon recognized in this year’s awards. Forty-five are small employers with between 35 and 99 employees, including the Tualatin Police Department. Forty-two fell in the midsize category, with 100 to 499 employees, and eight more are in the large category, with more than 500 employees.

“I believe we were the only government entity in the total of 95 on that list, and definitely the only police department,” Tualatin Police Chief Bill Steele said. “We got a nice little award to go with it, and we’re pretty pleased with that.”

The award was announced at the Tualatin City Council’s Sept. 28 meeting.

“It’s an outstanding award and an outstanding contribution from your staff and great leader-ship in the police department,” Councilor Paul Morrison said. “I think that’s reflected throughout the community.”

Mayor Frank Bubenik agreed and said he was “pretty pumped” upon hearing the news.

“It’s a great reflection on you and your leadership and the officers,” he told Steele. “If the people enjoy doing the work and enjoy working with each other, it’s going to reflect on the community when they’re happy with their jobs and happy serving the community.”

Helping You Navigate Your Journey Through Parenting: Understanding Ages and Stages