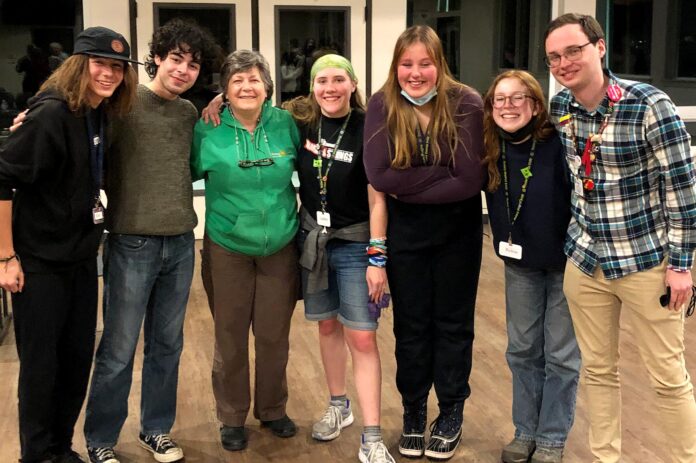 Barbara Lauritzen was a busy Tualatin resident, and then in 2003, she joined The Tualatin Rotary Club. Her high school daughter had been chosen as a foreign exchange student, and Barbara would enter the hectic and rewarding world of international diplomacy…one high school student at a time!

Barbara has hosted eight students from eight different countries: Mexico, Argentina, Thailand, Austria, Italy, Brazil, Japan and Germany. She took the role of “host mom” seriously. These students spent a school year at Tualatin High School, and Barbara managed their day-to-day necessities, schoolwork and entertainment. Her international diplomacy was bound with joy and many long-term connections.

Twenty years later, Barbara is still in contact with “her kids.” She has been to Buenos Aires to attend her Argentinian daughter’s wedding. She was hosted in Rome by her Italian daughter. While attending a Rotary Conference in Europe, she was able to see her Mexican daughter, who was currently living in Strasbourg, France. She reconnected with her Japanese daughter while visiting other students in South Korea. Barbara keeps up with the changes in their lives as they move on from high school, college, marriage and even parenthood. Every student has shared cultural awareness and international knowledge with the Lauritzen family. Understanding others is the first step to international peace.

Rotary has a way of finding the right people to volunteer for the right positions. Barbara moved on from hosting students to managing their stays. She took over the Foreign Exchange Program for the Tualatin Club. She was tasked to recruit students to go on long- and short-term foreign exchanges.

Club work led to more responsibilities as Barbara became a country officer. She has worked with students from all around Oregon and students from Czechia, Slovakia, Austria, Germany and Switzerland. In a recent interview, Barbara explained, “I was in charge of all the paperwork for the student leaving Oregon and the student entering from another country. I worked getting visas and all necessary arrangements for international travel. I connected with Rotary counterparts in other countries. I was the counselor for the high school students. I was making sure that they were where they needed to be, that they were doing what they needed to do and that they had all the support they needed to succeed. Exchange students represent their countries and Rotary to the world. They are sixteen and seventeen years old. They take on a huge responsibility and I needed to make sure they were learning, happy and expanding their horizons.”

Rotary is an international support group. When a Tualatin High School exchange student had a serious accident while visiting San Francisco, Rotarians in the area sprang to action. They provided homestays for a chaperone to remain with the student. They helped her host mom travel to San Francisco and provided her with lodging. International Rotarians assisted the student’s parents with travel from India and a home while they were visiting their daughter. For almost one month, Rotary members did all that was needed to allow for a full recovery for the student.

In January, Barbara attended a weekend conference with the students from Oregon who will be going on exchange in the fall. She met those who will be placed in her countries. She is excited to be sending kids off on their journey of international discovery. She is and will remain a true diplomat.

If you are interested in Rotary’s high school foreign exchange program or just curious about The Rotary Club, visit tualatinrotary.org, and a member will welcome you with care and possibly some international flair!

Most fondly remembered Western Pacific Memory for American sailors, for over...

Preparing to Sell Your Home? Remember the 3 D’s…