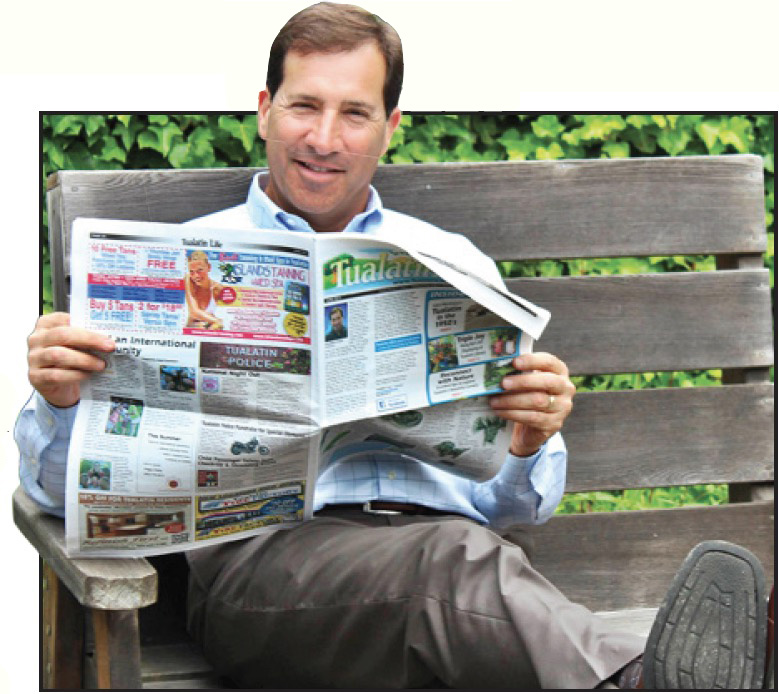 JB: How did you get the idea to start Tualatin Life?

JC: It was a combination of reasons. For starters, once the major recession began in late 2008, the staffing business became very depressing. People were frustrated looking for jobs when so few were being offered. People literally cried in my lobby as they were desperately looking for work. I needed an outlet, so in early 2009 rolled out the first issue and it got a very favorable response.

The second reason was that I was tired of seeing Tualatin’s news getting no attention from the Oregonian, and with other local media having such low circulations, our news was either ignored or so tiny it felt insignificant. I thought that a means to magnify local people and local stories would be engaging and effective in Tualatin.

Lastly, I wanted to become more of a participant in our community. I lived and worked in Tualatin, but didn’t feel connected to other local people and felt no real connection to Tualatin. I wanted to highlight the people of Tualatin, its history, its many outstanding ammenities and thought a micro-local newspaper could accomplish that.

JB: Before Tualatin Life and Integrity Staffing, you started The Coupon Tabloid at 23. At that early age, what did you learn in business that helped you the 2nd and 3rd time around?

JC: Grow vertically, not horizontally. Keep overhead low. Be about the bottom line and not top line. As a boss, allow those around you the room to be creative and succeed. Be present, but not controlling, as that limits their growth, which ultimately limits yours. It also taught me that anything is possible. Nothing is bigger than you are if you have the right attitude.

JB: You’ve started three businesses and succeeded with all three. What has been your recipe for success?

JC: Fill a need. Create something that you can sell with pride and vigor. Grow slowly and organically. We always hear about businesses that fail due to lack of funding, but I can list an equal number that failed because they started with too much funding. Their decision making is as if it’s play money and buying decisions aren’t reality based, but theoretical and unproven. The scrappier entrepreneur understands the importance of frugality, cash flow, doesn’t extend too much credit, etc. I actually find it fortunate that I started with nothing and that mentality has never escaped me.

JB: Are there any phrases you remember that have had a profound impact on you?

JC: “The respect of those you respect is worth far more than the applause of the multitude.”

JB: You father was a very influential figure in your life; what were biggest lessons you learned from him?

JC: He was a depression era kid, which had a large influence in his mindset, much of which was passed along to me, such as being frugal, don’t overextend, grow a business slowly, etc. I would run most every important business decision I made by him because he was generally more cautious than I was, which is exactly why he was such an excellent sounding board. I would often see just the blue sky and he’d warn me of potential downsides that I was too excited and inexperienced to consider. He threw caution into the discussion which, when I was younger, would often cause me to roll my eyes, but in hindsight, his influence grounded me and helped me approach things with a more prudent posture. He was also a very thoughtful, empathetic and reflective person, which also influenced my life immeasurably.

JB: What do you think Tualatin’s biggest challenges are in the next 3-5 years?

JC: Overcoming apathy. With term limits now in place, new people will need to step forward and participate. Our community has understandably become complacent due to the same leaders in place for decades and people feeling no need to educate themselves and participate with local issues. We’ve had incredible progress in a relatively short time and the day has come for new leadership to infuse our city with progressive, fresh ideas to bring us forward. Just a few years ago, we were the sleepy little city at the Jiggles exit, but look at us now! Great progress, but many of the same problems remain. I welcome new sets of eyeballs to solve our issues. The future of Tualatin looks very bright to me, and the more who participate, the better.

Jordan Berrier has been a Tualatin resident for 4 years. He currently works with Jonathan Crane at Integrity Staffing. You can reach Jordan at berrier. jordan@gmail.com.

Helping You Navigate Your Journey Through Parenting Moving Beyond “Good Job,...